A classic traveler’s dilemma: here you are in a lovely, historic, culture-filled place and you have only a limited amount of time to devote to activities. Do you try to devour as many galleries, museums, and historic buildings as you possibly can, or do you take a little time to step off the treadmill and relax, perhaps in some way capturing an echo of how the locals relax when they are off the treadmill themselves? Of course, in any major tourist center there are practically no places “untouched by tourism” because tourism is an essential part of the economies of such places. Yet even now it is possible to experience moments where the impact of tourism is lightly-felt, if at all noticed. That’s one of the things I like about Vienna.


Vienna is a major tourism hub, and it is also a very international city with institutions such as OPEC, the United Nations, and the European Union (among others) housing many offices and headquarters here. But it is also home to thousands of Austrians, and in their own ways they continue to live as Austrians and relax as Austrians.

The green lungs of the city, the famous Vienna Woods (Wienerwald), are one place where everyday Austrians like to go to relax. And thanks to Vienna’s world-class transportation system, park-goers simply hop on one of the several tram lines that run from the center of the city, ride it to the edge of town, and begin walking.

And once you’ve started walking, typically it isn’t long before you find yourself among vineyards – and if among vineyards, then how much farther is it to one of the informal Austrian wine garden restaurants? In the villages that used to be outside the city, and which are now being swallowed up as its extended suburbs, the local winegrowers have had the right, since Emperor Joseph II confirmed it in 1784, to offer this year’s vintage for sale in their own establishments. In the southern German dialects, of which Austrian German is a standardized version, the term heuer means “this year’s” – and so these institutions have come to be called "Heurige." When the year’s vintage is ready to be released, the vintner typically hangs a bunch of pine twigs over the entrance to the courtyard or house to let everyone know that he is open ("hat ausg’steckt," as the Viennese would say).

The Viennese microclimate seems to me (not an expert) to be kinder to white wine varieties. Rieslings and Austrian varietals, such as Grüner Veltliner and Müller Thurgauare, are becoming better known abroad. Reds are typically the central European varieties such as Blaufränkisch (also known as Lemberger), St. Laurent, or a successful cross between the two: Zweigelt.

Austrians share the famous Heuriger locations with tourists by the busload, especially in centers like Grinzing, perhaps the best known of the winemaking former villages, or Beethoven’s summer retreat in Heiligenstadt. Slightly further away, and therefore less crowded but still easily accessible from the city center, is Nussdorf. This is where I, and a few other travelers, went on this journey. Even though it was not the best weather for sitting in a Heuriger garden, we still enjoyed this year’s Gemischter Satz "gespritzt" with carbonated water. Typically the new wines are also accompanied by a buffet of light dishes, with some institutions offering hot meals (including gluten free and vegan!). We stayed with the classic snacks: a few spreads (Aufstriche) including the famous Liptauer cheese, a salad of salsify in a creamy sauce (Schwartzwurzel Salat), Austrian-style potato salad, and a wonderfully sour Viennese rye bread. We ended the afternoon fortified for the evening’s cultural activities and in an overall mood that could only be described as "gemütlich." 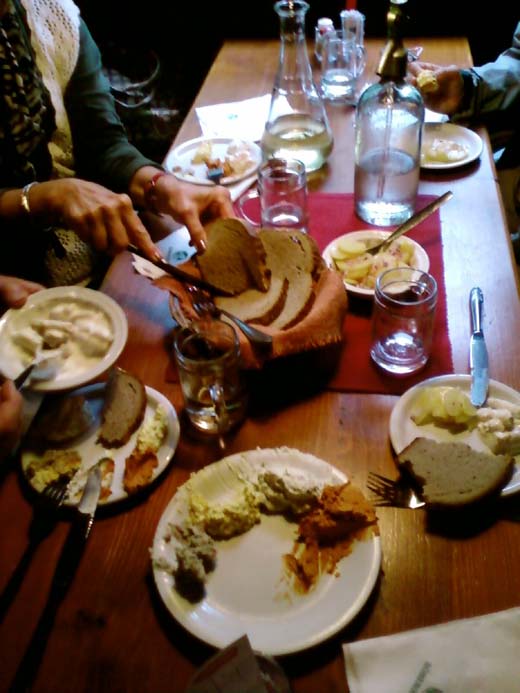 Hugh Agnew has been fascinated by Czech history and the Czech lands since first arriving in Prague as a graduate student in 1977. Now Professor of History and International Affairs at the George Washington University in Washington, D.C., he has taught courses and published books and numerous articles about the Habsburg Empire, the Czech national identity, and Czech heritage and history. His insightful talks on past Smithsonian journeys through the Bohemian countryside, on the Elbe and Danube Rivers, and in Prague at Christmastime have made him a favorite with Smithsonian travelers.