The Best of Europe: Pivo in Prague 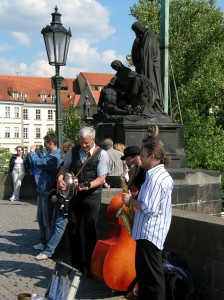 Musicians on the Charles Bridge in Prague. Photo: W. Higgins

Six years had passed since our last European family excursion, and my wife, her parents and I began our journey to Prague with the critical words that would ensure our survival:  dobry den (hello), pivo (beer), toalety (toilet). The trinity of travel.

Upon our arrival at Ruzyne Airport, we were greeted by the hotel car driver, and after a rather exhilarating fast ride through the city proper, we arrived at our hotel in the Old Quarter, which included an impeccable selection of contemporary art.

We were here to see a new world and Prague is a city to be explored on foot. It is a city that you can amble through without any pressure to tour “this” museum, “that” cathedral, or “this” garden as we had previously experienced in our journeys through Italy and France. You just saunter and enjoy the ambiance of the street, the scale of the city, its architecture and the energy of the passing crowds.

Our first stroll was to the Charles Bridge because we wanted to experience the city from the river. The bridge, lined with massive stone statues of Christ and various saints, is perhaps Prague’s most familiar monument, connecting the Old Town, the Staré Mĕsto, with the Little Quarter, the Malá Strana. The bridge is the hub of the city as it spans the Vltava River with its stone statues acting as sentinels protecting the passing strollers, the budding artists and musicians, and the infamous pickpockets of Prague.

One of the culinary highlights of Prague that we anticipated consuming with gusto was the world renowned Czech beer, especially the pilsner. The Czechs take their beer, pivo, seriously and we were going to as well. My wife and I set out one day in search of that clear and golden liquid refreshment found only in Prague’s best beer halls. Recommended by a Czech architect friend, the best of the pubs was Pivnice U Rudolfina, located in the basement of a nondescript building near the Old Town Square. As we sauntered downstairs into one of the two dining rooms, we immediately realized that this WAS a real Czech pub. We found a seat on one of the dark wooden benches amidst the loud and smoky room full of drinkers, mostly male, downing their pints of pilsner drawn fresh from the tank.

The waitress approached and since we spoke little Czech, we raised two fingers and said, “pivo.” She soon brought over two glasses of cold pilsner and then on a small sheet of paper made two scratches with her pen, left it on the table in front of us, and hurried off to wait the next table. The place was bustling with locals in full conversation and drink. What caught our attention the most were two older gentlemen, gesturing as they talked and drank over a piece of paper that had twelve scratch marks on it.

The following day we all enjoyed a pleasant walk from our hotel to the Old Jewish cemetery, Europe’s oldest Jewish burial ground and the only burial ground available to the Jews at that time. Hence, the crowded little cemetery contains more than 20,000 graves, and because of the lack of space, people are buried on top of each other, perhaps up to 12 layers deep.  It is an eerie feeling walking single-file along the stone pathway that winds its way through the cemetery. Many of the tombstones have small stones, rocks and prayer notes placed on top by visitors. We were silent as we walked through this peaceful yet sad setting. However, when my father-in-law took to sitting on every rock he could find in the pathway in order to rest his 90 year-old legs, we looked at each other and concluded that it was pivo time.

Where’s your favorite city to relax with a refreshing drink?

Guest Blogger William J. Higgins, FAIA is an architect with 37 years of worldwide experience, has practiced in 10 different countries, and has traveled through more than 20 countries across Europe, Asia and North America. He is contributor to two recent books: International Practice for Architects and Founder’s Folly. He has a Masters of Architecture degree from Harvard University, a Bachelor’s Degree from Louisiana State University, and has taught at Stanford University. He is a founding Principal of Architecture International, Ltd. and was a Principal of The Architects Collaborative, Inc.