The Artists of Lascaux 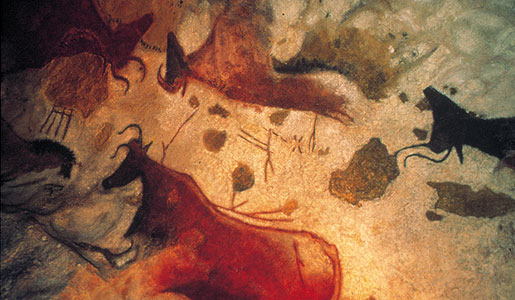 French painters go back a long way, at least 17,000 years! In 1940, four teenagers (and their dog, named Robot) discovered an astonishingly-painted Late Stone Age period cave at Lascaux in southwestern France. There are more than 2,000 figures in the cave with more than 900 images of animals, including horses, stags, and bulls. Other paintings include human figures and abstract shapes. So, who were these artists? People of the Late Stone Age ate a diet rich in reindeer, made and used tools, and created their own sculptures and other artworks. They would have made use of the bow and arrow and other weapons, lived in complex social groups,  and held spiritual rituals.The original cave has long been closed to the public due to the delicacy of the pigments. However, Lascaux II, an exact replica of the cave, has the paintings reproduced using the same materials as the original. If you'd like to see them, as well as a number of other prehistoric sites that dot southwestern France, please join us for Sojourn in the Dordogne this October.

If you'd like to know more about ancient peoples and think about what it means to be human, visit our online Human Origins Exhibit, from the Smithsonian Museum of Natural History. If you're in the D.C. area, you can also visit the  brick-and-mortar version of the exhibit at the museum.

If you could go back in time, what time period would you go to?