Secrets of the Iberian Peninsula 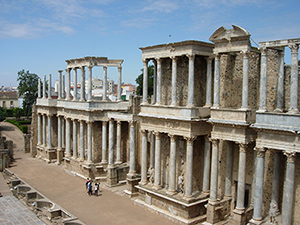 The Iberian peninsula holds many secrets for the overland traveler. As our group soon discovered, it is a land of contrasts.  The bustle of Lisbon and modern architecture of Madrid are worlds apart from a vast countryside with isolated towns that were connected by dirt roads and stage coaches just a half century ago. Nor has the pace of modernization erased the legacy of successive civilizations. Within Mérida’s medieval walls a 21st-century cityscape of late-model cars and smartly dressed citizens coexists with extensive Roman ruins reminiscent of Ephesus. The architectural delights of southern Portugal and Spain also bear witness to the juxtaposition of Moorish, Judaic and Christian communities that alternatively competed, coexisted and confronted one another over the centuries.​

Smithsonian Expert Charles Ingrao is Professor of History at Purdue University, where he focuses on modern Europe. An expert on the fomer Yugoslavia, he has published ten books and given hundreds of lectures to audiences across North America and Europe.