Renewal in Rwanda: Around the World with Dr. Richard Kurin

Flying from the arid and flat Rajasthani desert to the vegetative and volcanic Rwanda provides a strong contrast. Fertility in Rwanda is apparent up and down the hills surrounding Kigali, its capital, through the river valleys, and up along the slopes of its mountainous terrain. The rich black and deep red soils host deeply planted life.

The life-embracing environment of this land-locked country makes it all the harder to imagine the horrors inflicted here starting in April 1994, when, in a crazed 100 days, more than one million were slaughtered in a devastating, politically–induced, genocide.

The people we meet are all so nice, so humane, and so determined not to forget the genocide—when Hutu were set against Tutsi and other Hutu—but to draw lessons from it in what appears to be a national resolve to ensure nothing like it ever happens again. We visit the Genocide Memorial Center on a hillside in Kigali. Tens of thousands are buried under huge mass graves here. It is a beautiful, peaceful site that belies the terror with which so many men, women and children faced their deaths. The museum is masterfully done, exploring the roots of the conflicts in Rwanda and the region, the politics of colonialism and nationalism, the racism fostered within the population, and the evolution of the genocide itself. Exhibits compare what happened here to the Holocaust in Europe, Armenian, Cambodian and Balkan genocides as well. Our local guide points herself out in an exhibit photograph. She was only a few years old when it was taken. She and her family had sought shelter in a church when it was attacked, bombed and set afire. Luckily, she survived, and she reveals her scars—memories burned into her skin to show it. 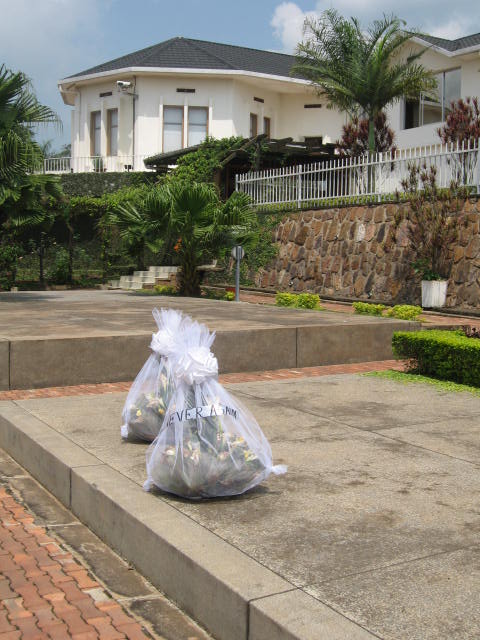 The mass grave at the Genocide Center

What impresses all of us is not the scale of man’s inhumanity to one’s fellow man, but the ability of our guide and everyone else we meet to move forward with determination and grace, even forgiveness, and build a better future.  The resilience of the human spirit is amazing to behold, especially among people who have gone through so much. 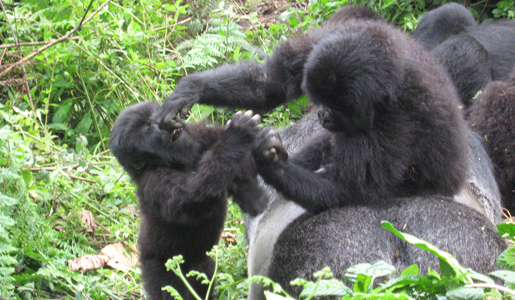 A couple of young Silverback gorillas playing together

Almost all the group journeys up to the northwest of the country, up into the Virunga Mountains and Volcanoes National Park on the boarder of Uganda and the Congo to see the mountain gorillas. Once reduced to under 500, they too have made a comeback and their number is on the increase. This is the area and the species made famous by the work of Dian Fossey. Fossey started out a primatologist, minutely observing the gorillas and seeking to understand their physical adaptations and forms of social organization and learning—which could provide insight into the roots of human action. Fossey did that, but she also became a conservationist, concerned about the survival of this magnificent species threatened by poaching, the encroachment of farm land, diseases spread by human contact and environmental degradation. Her work has inspired scores of others to study and preserve the gorillas and their environment, and now, because so many local folk benefit from the revenue tourism brings in—from trekking and performances, they have a strong stake in the gorilla’s survival. 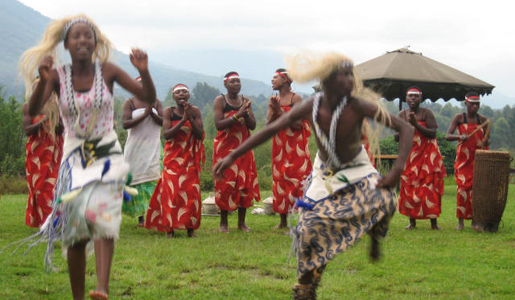 A dance performance at the Mountain Lodge

Our group splits up into different lodges and in the morning sets out in groups of eight with guides, porters and trackers, to find “families” of mountain gorillas. Each family has an alpha male—a silverback gorilla, who leads the group, several attached mature females and child apes as well as other males—some of which split off to try to form their own groups or challenge the leader. 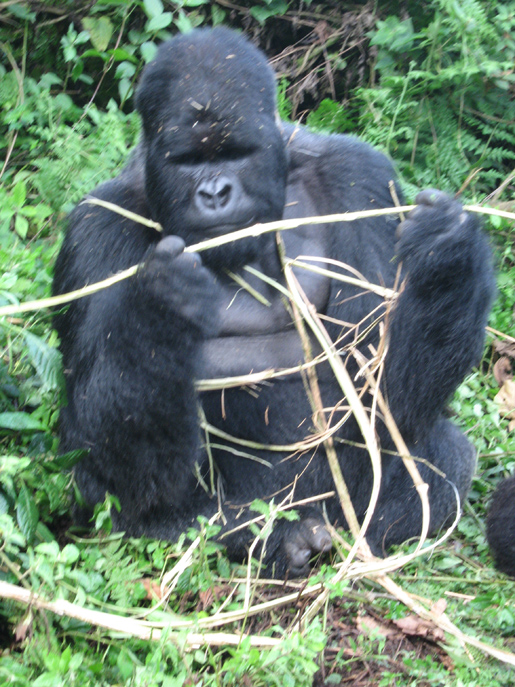 After receiving our briefings about how to act in the presence of gorillas, we drive a Land Rover on a nearly un-passable rocky path to a fence that divides the tri-country gorilla reserve from adjacent farmland. We are led by men who cut a trail through the bamboo and jungle growth with their machetes, and accompanied by others with rifles. We move in single file up the slope of Mount Gahinga—whose peak at over 12,000 feet we cannot see given the foliage. Our pace setter is a vigorous 83-year old fellow traveler. Our trackers have been following the family of gorillas we seek and lead us to them. Luckily, our trek takes us less than an hour. Others have to walk three and four hours. But, all of a sudden, in a clearing we see first an adult male, then two females with their young, and then lumbering into a clearing comes a silverback weighing some 450 pounds.  Eventually, ten gorillas are a hands-reach from us, eating, playing, sleeping. We whisper; we do not eat nor make fast moves. Instead, we are all reverential, feeling privileged in the church of nature that we can share time with these beautiful and alluring creatures. Watching them is simply awesome. And the experience affirms again that we perhaps best realize our humanity when we see life is a treasured gift.

POSTED IN:
Africa Around the World Dr. Richard Kurin Rwanda