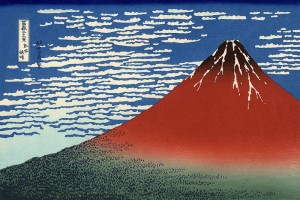 We may recognize Katsushika Hokusai's South Wind, Clear Sky (also known as Red Fuji) but not know much about the artist or why he painted it red. Born in 1760 in Edo (now Tokyo), Japan, the artist had a lengthy career but most of his best known works were created after the age of 60.

Hokusai created the the series "Thirty-Six Views of Mount Fuji" between 1826 and 1833, both as a response to a domestic travel boom and as part of a personal obsession with the mountain. But to see Mount Fuji as red as the artist painted it is a rarity. The volcano has to be seen at a special time of day, under a series of the right weather conditions. These conditions only occur at most three times a year, and sometimes a year can go by without one red Fuji. Some artists and photographers challenge themselves to find, capture, and create a red Fuji as Katsushika Hokusai did in the 19th century, but it takes a lot of patience as you'll see from this segment from Portrait of Artistic Genius: Katsushika Hokusai on the Smithsonian Channel.

Maybe you'll be one of the lucky ones to see a Red Fuji at Mt. Fuji-Hakone-Izu National Park on our Insider's Japan tour.

Which natural location inspires your artistic side?