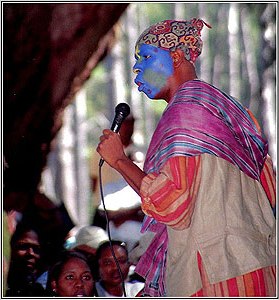 The Lowcountry areas of South Carolina and Georgia are known for many things: good music, excellent food, and continuing southern traditions. But there are no communities in the South that have preserved their history, culture and language quite like the Gullah people.

The Gullah, who originated as slaves in the 18th and 19th centuries and eventually created their own communities, have preserved their language, which is based on English with strong influences from West and Central African languages such as Mandinka, Fula, Mende, Vai, Akan, Ewe, Kongo, and Kimbundu. There are an estimated 250,000 people who still speak the Gullah language today. One of the most famous speakers is Supreme Court Justice Clarence Thomas, who grew up in the coastal region of Georgia.

Their storytelling traditions have successfully blended not only their African traditions, but their historical experiences in America as well. The result is a collection of trickster tales that teach youngsters moral lessons while celebrating ancestor tales of clever and self-assertive slaves, the most well-known being Br’er Rabbit.

The Gullah language was originally believed to be a showing of low socio-economic status and corrupted African Americans from learning proper English, but in the 1930’s and 1940’s a linguist named Lorenzo Dow Turner did a study of the language based on field research in the coastal areas. He identified over 300 loanwords from African languages and found people in remote seaside communities who could recite songs, stories, and count in the Mende, Vai, and Fulani languages of West Africa. Today, the Gullah Festival in Beaufort, South Carolina celebrates these longstanding cultural traditions.

Have you been to the Gullah Festival? Share Below.

If you haven't been to the Gullah Festival, check out The Smithsonian’s Anacostia Community Museum Presents: Word, Shout, and Song: Experiencing South Carolina's Gullah Traditions and join the celebration!