Lisbon and Home: Around the World with Dr. Richard Kurin

The flight up the west coast of Africa was instructive. Inland, to the east, lay the vast Sahara. The coast hosts even now, evidence of numerous forays by 15th century Portuguese navigators to sail around Africa’s Cape of Good Hope and onto India. Those same voyages led to the settlement of islands on the Atlantic horizon—Cape Verde, the Azores, and Madeiras—and beyond, the “novo mundo,” or new world, of the Americas.

Lisbon, Portugal’s capital reflects the heyday of what became a world-stretching empire that included Brazil, Angola, Mozambique, Goa, Macao, and Timor. It was seafaring that gave Portugal its wealth and ecumenical traditions in its cuisine, decorative arts, and music. Much of this is reflected in the Museo Medeiros e Almeida which we visited for our last group dinner. The astounding collection in a former private home, now a museum, includes an altar room, cabinets of watches and time pieces, King Louis furnishings, Dutch and Flemish masters, blue and white tile and Chinese porcelain, Persian carpets, and other treasures from around the world. 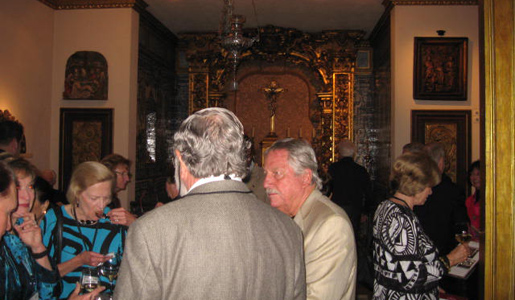 The ecumenical bent is also reflected in Portugal’s music—notably Fado. While the genre has roots in medieval Iberian tradition, it largely took form in the early 19th century around Lisbon’s port neighborhoods. It is a seafarer’s music, short poetic ballads filled with soulful longing. Fado means “fate” or “destiny,” and it is easy to understand how the uncertainties of sailing, of being away from home and family, and facing the unknown influenced the style. Typically performed by either a man or woman accompanied by a guitar and classical Portuguese lute, this musical balladry developed in bars, taverns, houses of prostitution, and other such establishments. It was also influenced by Portugal’s encounter with colonies such as Brazil and Cape Verde, where the musical and lyrical sensibilities of their sailors and workers melded with those of the Portuguese. By the late 19th century and certainly in the 20th, Fado gained increasing respectability and was professionalized—performed in restaurants, recorded, heard on radio, then television, and subject to study, elaboration and increasing theatricalization. 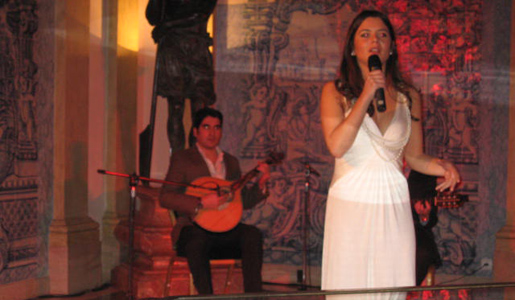 Our youthful fadista, during our Fado performance

Now Fado is Portugal’s “national music,” and we witness a fine performance interlaced with our dinner. The tunes are both melancholy and heartfelt—kind of like combining the blues with country and western music. But our youthful fadista, or songstress, entranced the group, and we enjoyed the spirit of our dinner together.

Our flight home to Washington, D.C. includes a final exam that Johnnetta and I have composed for our travelers—based upon more than a dozen in-flight formal lectures, all of our visits, informal presentations and so on. This is a group of high achievers, and everyone “passes.” The spirit is good—TCS & Starquest have done a wonderful job with the logistics and coordination; our Thompson Air flight crew has kept us steady, safe, and comfortable in the skies as we logged more than 29,000 miles on their jet.

As we headed home, I and others reflected on the trip. Just maybe it was Mickey Hart’s drum circle that got us off on the right note, but our group became more than just an agglomeration of 70 individuals—we became a community of sorts who traversed the planet and together shared a wonderful experience of the world. We got to know and appreciate each other. People looked out for one another. We each, staff and travelers, not only carried out our roles, but went beyond them in forming endearing friendships. It was a joy to be part of this.

We also learned a few things on the journey. The world does indeed host an extraordinary range of cultures which provide insight into the ways of how to be human. Everyone can gain insight and draw inspiration from each other. At the same time, there are ways of being humane—some of which may be deeply ingrained, others which have to be learned through difficult, sometimes horrific experience, that people everywhere can aspire to. In our journey, we were received and treated extraordinary well by Japanese, Balinese, Vietnamese, Nepalese, Bhutanese, Indians, Rwandans, Senegalese, and Portuguese; our group returned that welcome with a great deal of cultural appreciation for those we met and encountered. That kind of mutual respect is a pretty good recipe for succeeding on our shared planet.

POSTED IN:
Around the World Dr. Richard Kurin Europe Portugal