Every trip has an unexpected delight.  Ours was the night we went to hear the Klezmer band.

We were in Krakow, a city that tends to charm from the first instant.  We were expecting to hear a classic Klezmer band, probably older guys in traditional dress, with a lively clarinetist, and a raft of familiar Jewish classics.

But that’s not what happened.

In fact, I was initially disappointed as the four musicians of Tempero came out on the stage at the Isaac Synagogue.  They were young, casually dressed, and looked as if they were headed to a Blues Festival.  I checked my ticket to make sure we were at the right concert.

Then they started playing. 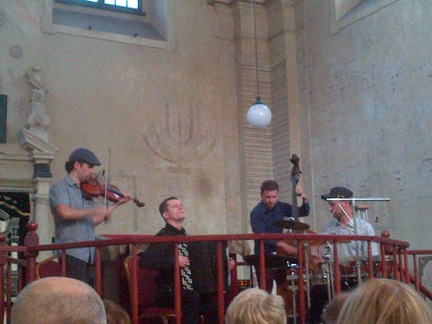 The opening violin strain was so tender, we were transported us back to the 19th-century shtetl. Then the percussionist swept his brush across tiny chimes, and the village came to life. We were dancing through a Chagall painting.

The masterful accordionist sound, at first, like a full orchestra and, then, like a shepherd’s pipe. His virtuosity cannot be conveyed, unless you’ve witnessed this kind of classical accordion playing before. The bass player, well, he played with the kind of musical calculus you find only from jazz greats.

And so they went, from tune to tune. Some selections were traditional, others original, but each unfolded in ways that surprised us. The ensemble was so tight our mouths gaped. The “experienced” Klezmer lovers in our Smithsonian group were shaking their heads in disbelief and delight at the originality of the settings. Torrents of musical joy poured from that stage.

Carol Reynolds weaves high energy, humor, and history into everything she does. After a career in music history at Southern Methodist University, Dallas, Professor Carol and husband Hank began designing multi-media fine arts curricula. Her unprecedented Discovering Music: 300 Years of Interaction in Western Music, Arts, History, and Culture (2009) has reached students across the world. In 2011 she released a cross-discipline course called Exploring America’s Musical Heritage. She is now creating a curriculum on the history of sacred music from Jewish Liturgy to 1600. Her research interests include German Romanticism and the musical court of Frederick the Great. She is fluent in German and Russian and maintains a home in Weimar. Dr. Reynolds is a staunch advocate of arts education at every stage of life and speaks regularly at educational conferences across the U.S.A pianist and organist, she is a popular speaker for organizations like The Dallas Symphony, Van Cliburn Concerts, The Dallas Opera, Tulsa Symphony, Kimball Museum, Fort Worth Opera, San Francisco Wagner Society, and the Davidson Institute.