« Off the Coast of Australia
Family Life in Ancient Egypt » 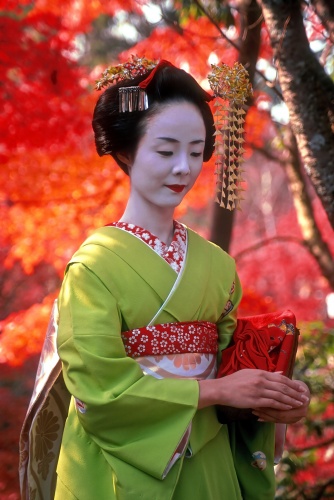 The beauty and grace of Japan's geishas are among many reasons visitors travel to certain parts of the Japan, such as Kyoto. The geisha tradition gained prominence in the mid-18th century, as women worked as skilled entertainers after seeing the success of male performers. Their talents included dancing, singing, playing music, and even creating poetry and artistic calligraphy.

While well-known for their exquisite clothing, one of the most notable identifiers of a geisha is her immaculate make-up. The application of this makeup is time-consuming, detailed, and specific, and is an extra effort for apprentice geishas who are required to wear it while in public. For the first three years, the young maiko wear their make-up almost constantly.

The make-up of an apprentice geisha include three notable features - the thick, white foundation, red lips, and red and black highlights around the eyes. The white foundation originally included lead, but when it was discovered how toxic it was, the ingredient was changed to rice powder.

The white foundation covers the face completely except for two notable areas - the hairline, which gives the illusion of a mask, and the nape of the neck, which is designed in a traditional W shape, highlighting and accentuating the area, which is considered alluring. Then the eyes are outlined, originally using charcoal. Today modern eyeliner is used, but maiko still add red around the eyes to show their youthful status.

The woman's red lips are filled in using a small brush with crystallized sugar added to the color to add texture. The rank of the geisha can easily be identified by looking at her lips. First year maiko only have their lower lip filled with color. Only a full-fledged geisha may have her lips fully colored red. It rare to see the lips filled in western-style as it would make the lips look unusually large; the intent is to give the illusion of a flower bud.

After a maiko has worked for three years, her make-up becomes more subdued because now she has matured to a point where her natural beauty can be seen. After the age of thirty, geisha wear the traditional make up only for formal events or special performances.

Which kind of make-up would you never forget to put in your luggage? Share below.

Appreciate the cosmetic efforts and performance skills of geisha in person on our Eternal Japan tour. International airfare included!