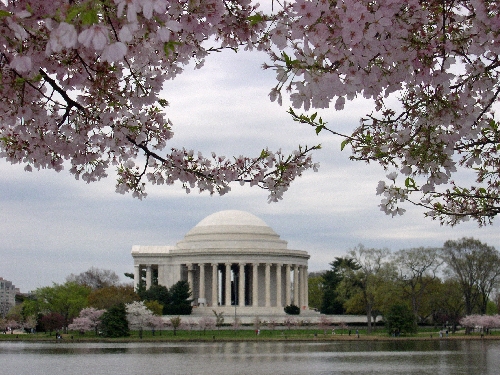 There is nothing like walking around near the Jefferson Memorial when the cherry blossoms are in full bloom. The entire area is coated in various shades of pink, giving everyone in Washington, D.C. the sense that spring has finally arrived. But how many trees are there? Where did they come from? These are the kinds of questions that kids tend to ask their parents every year. Again, we're here to provide you with the important fun facts that satisfy your child (or grandchild's) thirst for knowledge.

1. In Japan, the flowering cherry tree, or "Sakura," is an exalted flowering plant. The beauty of the cherry blossom epitomizes the transformation of Japanese culture throughout the ages, as well as being symbolic of the constant transition of human life.

2. The original 3,000 cherry blossom trees were a gift from Mayor Yukio Ozaki of Tokyo in 1912 as a symbol of the longstanding friendship between Japan and the United States.

3. The First Lady at the time was Helen Herron Taft. She and the Viscountess Chinda, wife of the Japanese ambassador, planted the first two trees from Japan on the north bank of the Tidal Basin in West Potomac Park on March 27, 1912. These two original trees still stand several hundred yards west of the John Paul Jones Memorial, located at the terminus of 17th Street, SW. Situated near the bases of the trees is a large bronze plaque which commemorates the occasion.

4. Three years later, in 1915, the United States reciprocated the gift of the cherry trees by sending flowering dogwoods to the people of Japan.

5. In 1965, the Japanese Government donates 3,800 more trees. These are American-grown and the 1912 ceremony reenacted this time by Lady Bird Johnson and Mrs. Ryuji Takeuchi, wife of Japan's Ambassador.

Visit the original homeland of the trees on Insider's Japan.

Have you seen the cherry blossoms in full bloom in Washington, D.C.? Share below.