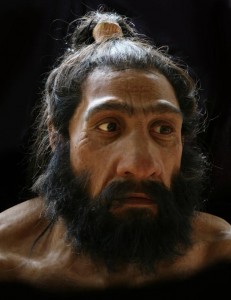 Here at the Smithsonian, we've been very excited about our new Human Origins exhibit at the National Museum of Natural History. The exhibit mixes research, technology, and new developments in the field of anthropology in a way that isn't intimidating, even though the idea of humans being around millions of years ago can seem overwhelming. With current research being done places such as Kenya and China, and discoveries that have been made in Iraq and Indonesia, evidence of our origins span the globe.

Yet, there are some common misconceptions that have been made about evolution that are worth clarifying. For example, it is commonly believed that evolution is about progress and that each living thing is changing for the better. The reality is that some organisms don't change over time—including some mosses, fungi, opossums and crayfish. They are a great fit in their current habitat, so there is no need for them to change. Others, such as beetles, need to change in order to survive due to changing climates or new competitors. Humans weren't the first or last organism to change or evolve on planet Earth.

Another misconception is that humans are no longer evolving, so we can't observe evolution in action. Plus, humans seem far too complex to have evolved in the first place. The reality is that evolution takes places over a large span of time, and human evolution occurs over so many generations that we can't observe it in one lifetime. Evolution occurs to populations and species, not necessarily individuals. For example, a giraffe may not grow a longer neck during its lifetime, but over time a community of giraffes with longer necks will survive while the ones with shorter necks will die out. As a result, longer-necked giraffes will mate with each other over many generations, creating a noticeable difference over a long period of time.

To relate this to a human change, most adult mammals (including humans) are lactose intolerant and cannot digest milk. But 80% of adults of European ancestry do have a gene that allows them to consume milk. Why? About 5,000 to 10,000 years ago, dairy farming became a part of European life, and there was a genetic response to this change in diet. We see this evolutionary response when we drink milk today.

There are so many ideas to explore in the Human Origins exhibit, including the big question—What does it mean to be human? Is it how we care for each other? Is it our belief system? Is it biological unity? These are some pretty big questions.

What does it mean to be human? Share your ideas below.

Experience the Human Origins exhibit at the National Museum of Natural History (now celebrating its 100th year!) Also, enjoy a exclusive reception at the museum on our Celebrate Smithsonian tour. Want to see what you might have looked like as a Neanderthal? Check our our new mobile app, MEanderthal.