Happiness in Bhutan: Around the World with Dr. Richard Kurin

Though a fogged-in airport in Katmandu delayed our departure to Bhutan, we arrived safely in the beautiful Himalayan Royal Kingdom.

Our group split into two, staying at hotels in the Paro Valley, each enjoying a good meal and a stimulating lecture. My group stayed at the Ziwa Ling, built in the style of Bhutan’s wooden decorated buildings, and participated in a session on Gross National Happiness by Kempo Tashi, a Buddhist scholar and the head of Bhutan’s National Museum. Gross National Happiness is the government’s national policy, initiated by the former king, to remove barriers to enlightenment among its people by encouraging cultural and environmental preservation, improvement in the quality of life—through education, economic progress and so on, and accountable, efficient government. It is an intriguing way of thinking about policy goals rather than just in terms of per capita income or strictly utilitarian measures. We had many questions and a lively discussion. 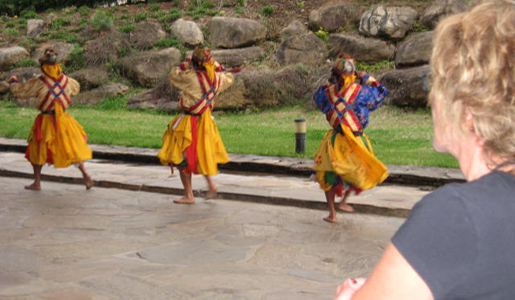 Local dancers greet the group at the hotel

Again, splitting into smaller groups, an adventuresome lot took on the challenge of climbing up to Paro Taktsang or Tiger’s Nest, a Buddhist monastery perched at 10,000 feet along a mountainside. Aside from its religious significance, the monastery is an impossibly beautiful logistic and architectural marvel, now on the list for a proposed World Heritage Site. Legend has it that Guru Padmasambhava, who first brought Buddhism into the region meditated in a cave at the site in the 8th century. An elaborate monastery was built in the late 17th century, and after a terrible fire in 1998, it was renovated in 2005. Though the climb is tough and challenging, a good number of our colleagues successfully make the arduous climb and take in the astounding site of the Paro Valley laid out before them. 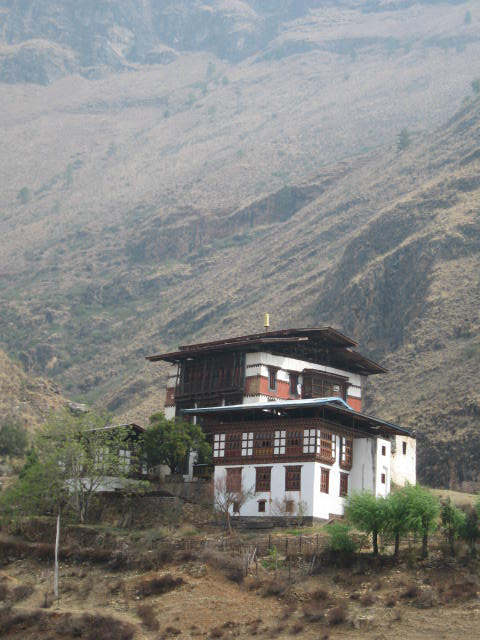 A solitary monastery in Bhutan

Others head for Thimphu, the kingdom’s capital city and the largest town—now about 100,000 in residence. The drive takes us along the Paro River and then northward up the Thimphu Valley. Gorgeous countryside, with mountains, terraced rice fields, and native-style homesteads and Buddhist sites greet us. 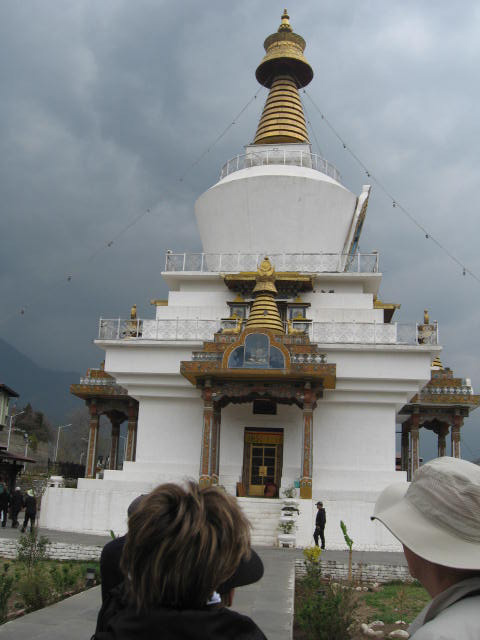 A stupa in Thimphu

In Thimphu, we visit sites—a stupa and shrine, the Post Office—which produces the most amazing stamps in the world, and the bazaar. I take a small sub-group to government offices where we have a private meeting with Prime Minister Jigme Thinley. I have known Thinley since we worked together on the Bhutan program for the Smithsonian Folklife Festival years ago. He’s been in office for five years—having been the first democratically elected head of government since the kingdom transitioned to a constitutional monarchy in 2008. He’s now running for re-election and reflected on Bhutan’s progress, its issues and challenges. The discussion was excellent, and members of our group came away impressed with his knowledge, wisdom and perspective and what it said about the quality of Bhutan’s leadership. 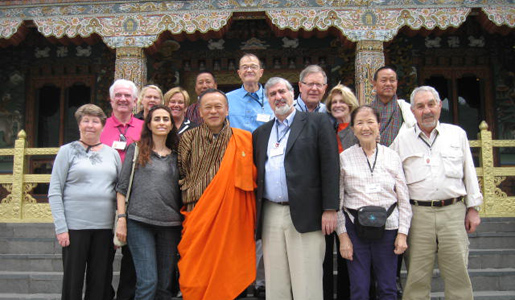 Smithsonian travelers with the Prime Minister of Bhutan.

We followed this up with a visit to RENEW, a project to help women suffering domestic violence. The project provides counseling, temporary residence, and job training. Again we were impressed with the straightforward, compassionate and thoughtful problem-solving approach explained by the director and her staff. With TCS Starquest, we donated to the center a new refrigerator, which had been at the top of the project’s request list.

At lunch, some of the group discussed elections, social issues and other matters with Dorje Tsherling, Bhutan’s director of culture. We found interesting comparisons between the U.S. and Bhutan. 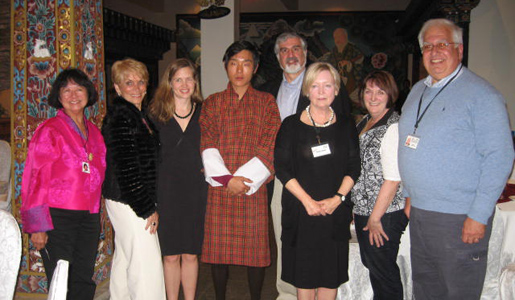 Smithsonian travelers with the Prince of Bhutan

In the evening, the whole group came to the Ziva Ling for a special dinner, where we hosted His Royal Highness, Prince Dasho Jigyel Ugyen Wangchuck. The young prince had led the Bhutanese delegation to the Smithsonian Folklife Festival in 2008. We had a spirited dinner conversation. He is now heading Bhutan’s Olympic Committee and seeking to have his country compete in a number of both winter and summer sports. As a 28-year old, he is attuned to the thinking of Bhutanese youth and their aspirations for the country. The Prince graciously greeted and spoke with every person at dinner, hearing their impressions of their quick visit, and urging them to return. Everyone heartily agreed. 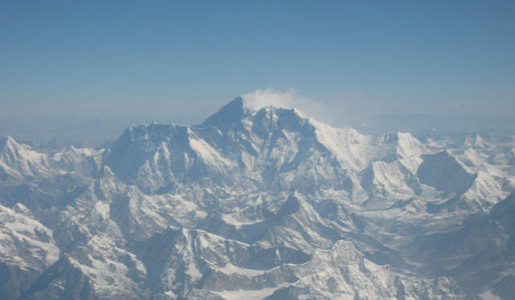 A glimpse of Mount Everest from the sky

Early the next morning we head out for Katmandu and India. On the way, we get a special treat. The sky is relatively clear at 30,000 feet, and we are able to see the high peaks of the Himalayas, including Mt. Everest. After a truly wonderful, enlightening visit to Bhutan, we are on top of the world!

POSTED IN:
Around the World Asia Bhutan Dr. Richard Kurin