Ha Long Bay and Hanoi: Around the World with Dr. Richard Kurin

“Long” is the Vietnamese word for dragon, and the limestone outcroppings, resembling the curved undulations of the mythical creature give this amazing bay its name. Indeed, cruising around Ha Long Bay takes on the character of a legendary odyssey, as peaks and caves, sometimes shrouded by fog and revealed by the lifting mist suggest a primeval time and place. Yet, here and there, are small floating villages, with one-room schools, and even wi-fi, people catching fish for market, and serving a burgeoning tourist industry of cruise boats—or “junks” as they are called. 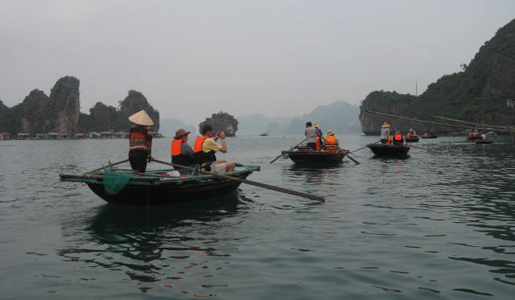 Rowing along the Ha Long River

Members of our group watched the scenery unfold aboard our comfortable ships—nice cabins, dining rooms and decks, and ever polite staff. Every few hours we were off to another section of this immense waterway. Some ventured on kayaks, others in row boats to go exploring inlets and geological features. Most went exploring into the marvelous caves, carved out of the limestone. “Surprise Cave” was indeed stunning, a massive network of three caves now joined together with cathedral-like splendor and an awe-inspiring nature. Its designation as part of a World Heritage Site and as one of the seven wonders of the natural world is well-deserved.  The shapes and natural tableaux, the muted though fascinating colors of the cave—and its sheer size—all entranced our travelers. 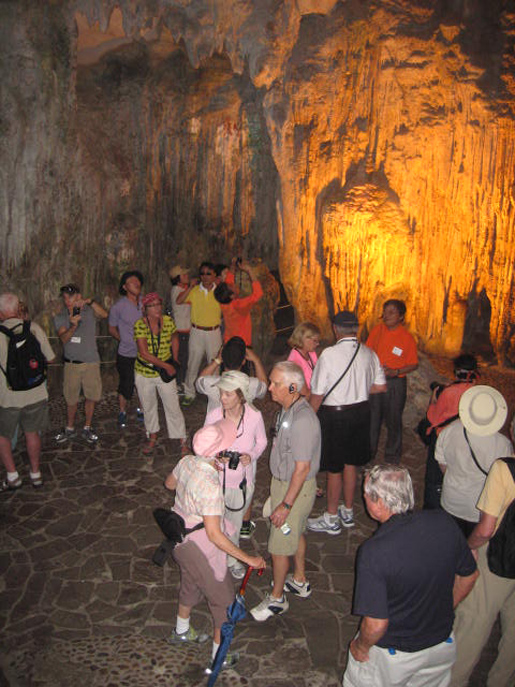 Our two days on the bay included hosting a group of bay-resident school kids, who were adorable and gave us a sampling of their singing. One of our groups returned the favor with “I’m a Little Teapot,” another with “Old MacDonald Had a Farm,” and still another with “Goodbye, Farewell.” If our performance faltered it was not from lack of trying and the feelings were heartfelt. Later, some of us got into a discussion of what best constitutes America’s “national song,” with the “Star-Spangled Banner,” “America the Beautiful,” and “This Land is Your Land” the favorite nominees. One wonders whether these perennials will endure in ensuing generations. 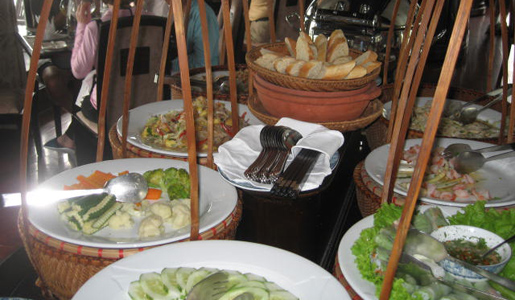 The travelers' buffet on their ship

We enjoyed the delicious Vietnamese food aboard the ship—the nation’s mainstay Pho (pronounced fuh) a soup broth with rice noodles and choices of beef, chicken, onions, chilies with an optional squeeze of lemon proved popular. But so did tiger prawns, various rice and noodle combinations, and local vegetables. Dragon fruit, papaya and regionally grown apples made for tasty fresh desserts. We even learned to make fresh and fried spring rolls, and had a nighttime toast of rice wine.  The ubiquity of rice on the menu mirrors the landscape of Vietnam’s plains in the north and the Mekong Delta in the south—green rice fields for as far as the eye can see. The warmer south sustains three rice crops annually—the colder north two, we are told. 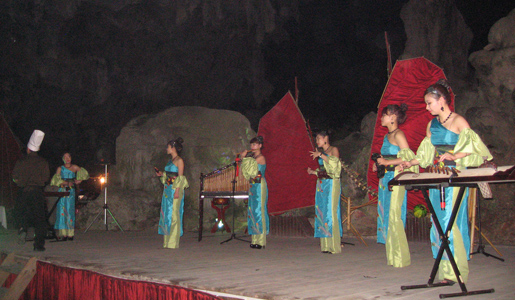 In the evening, we entered another decorated cave for a sumptuous dinner featuring local sea food, with clams, oysters, crabs, prawns and other delights. A young and energetic women’s band entertained with a selection of contemporary Vietnamese, American and Karaoke. The xylophonist was really talented, and I thought of her performing with Mickey Hart—she was that good.

A Tai Chi class marked our final morning in the bay. A waitress on board was our instructor, and her grace was astounding as she put us through our stretching paces. This was calisthenics artfully done. Cousin to forms of martial art, and originally, I believe, derived from the yogic practices of Buddhist monks, the movements could just as well be dance steps and poses. At breakfast, as I saw my instructor serve coffee and clean tables I smiled at two things; one, registering how in her seemingly utilitarian tasks she mirrored the Tai Chi movements, and two, how you never know who can teach you something new.

Off to Hanoi, our travelers split up—seeing museums, visiting the market, and among other sites the “Hanoi Hilton” which housed captured American GIs during the Vietnam War. Some visited with heavy hearts, either having served in the war, or having friends and relatives who did.

The changes in Vietnam since that time are huge. While perhaps officially a socialist country, shops, markets, entrepreneurship, business competition, and the building of private homes abound. Foreign owned factories along the main highway proliferate. While flags proclaiming communist rule still flutter in the wind, the place, at least at the level of individual thought, talk and action seems quite open and free.

An evening at the Museum of Ethnology ends our visit. We enjoy a performance of traditional water puppetry with musical and pyrotechnical accompaniment. We are joined by the U.S. Ambassador to Vietnam David Shear who clearly explains our nation’s current relationship with Vietnam and provides insight as to his mission here. The Smithsonian has worked closely with the museum over the past decades, and I miss the founding director Dr. Huy who had been called out of town unexpectedly. I’d worked with Huy on programs for the Smithsonian Foklife Festival and on researching the regions culture and traditions.  Fortunately I also worked with his successor, director Trong, and he gives a nice introduction to the group about the museum, which is translated from the Vietnamese to English. A Vietnamese meal accompanied by a musical serenade and a cool breeze makes our gathering even more memorable.

POSTED IN:
Around the World Asia Dr. Richard Kurin Vietnam