« Photo: Zebra Stripes
Why I Love Returning to Egypt »

Kate Desvenain: Kris, you are known for discovering new species of mammals worldwide. Can you tell us about your most exciting discovery, and how you decided what to name it?

Kris Helgen: Though I go looking for mammals in some of the most remote corners of the globe, sometimes the most startling finds are right under our noses. Three years ago I “discovered” a fantastic new species of bat from Papua New Guinea and the Solomon Islands—not out in the rain forest, but in museum cabinets at the Smithsonian. It’s a giant black bat with a monkey-like face, red eyes, a meter-wide wingspan, and larger teeth than any other bat in the world. Before you succumb to nightmares, I should tell you that it uses its big teeth to crack open nuts and big tropical fruits!

In addition to those found at the Smithsonian, I also found specimens of this species in museums in Sydney, Chicago, and Honolulu. The specimen in Chicago had been in the museum since 1929, the Sydney specimens since the 1930s, and the Smithsonian’s series dated to the Second World War when American troops were stationed in the South Pacific. You might think that such an conspicuous bat could not go overlooked in museums for so long, but there you have it. I named the species Pteralopex flanneryi after my doctoral advisor, Australian scientist and author Tim Flannery, to thank him for many years of scientific mentorship. Its common name is the “Greater Monkey-Faced Bat." The species survives in the wild today, but only just—it is a highly endangered species that lives only in undisturbed lowland rain forest, is sensitive to hunting, and is extinct in most areas on the four islands on which it occurs.

KD: You worked in Botswana for a number of months in the Okavango Delta. Can you describe what kind of research you were doing there?

KH:I was working to document the distribution of smaller mammals in the Okavango and the adjacent Kalahari Desert, in part to help understand which rodent species are involved in the maintenance and transmission of bubonic plague in Botswana. I was literally dodging elephants and lions while I chased after mice! I also had the unusual pleasure of being briefly involved in a study of an AIDS-like disease in lions with scientists from the U.S. National Cancer Institute. They had to tranquilize lions in order to take blood samples and measurements. Handling wild lions is certainly an education and awe-inspiring even—to be up close and personal with the King of Beasts!

KD: People travel to Africa to see the large concentrations of large mammals that we just don’t see here in the United States or Europe. Are these concentrations a result of the particular African landscape, the species themselves, or is there a human factor involved?

KH: It’s a good question. Fifty thousand years ago—not so long ago in terms of natural history—diverse assemblages of large-bodied mammals occurred across the globe—in Africa, Asia, Europe, the Americas, and Australia. Back then, there were places all over the world that might have looked something like the big protected areas of Africa, like the Serengeti or Okavango, do today. But between then and now, the great majority of the world’s very large mammals—species like saber-toothed tigers in the Americas, cave bears in Europe, mammoths in North America and Eurasia, and giant kangaroos and wombats in Australia—have become extinct. Scientists still argue about the factors underlying these extinctions, but it seems that climate change and human hunting played central roles. The extinctions are closely timed to the arrival and expansion of humans on all of these continents. Only in areas where humans have lived for longest—in Africa and Asia (and especially Africa) do the largest animals (such as elephants, rhinos, and big cats like lions and tigers) and extremely diverse assemblages of large mammals (such as the many coexisting species of large ungulates that can be seen in Africa today) persist. In the twenty-first century, these huge animals survive in some areas of Africa primarily because people are actively working to protect these species and their remaining habitats. I do think that there is something at the core of every human being that is drawn with a mix of wonder and fear to see these large animals, in the flesh and in the wild. Something draws us all back to Africa.

KD: As someone who sits on the Conservation Committee of the American Society of Mammalogists, what do you see as the biggest threat to African game today, and what can be done about it?

KH: Large concentrations of really big wild animals require extremely large land areas with minimal human presence to persist in the long-term. But many areas of Africa have high human population densities, high human population growth, and trenchant poverty. The needs of humans and wildlife can thus readily come into conflict in Africa (as everywhere), with the two vying for space and resources and coming into direct conflict in areas of abutment and overlap. Africa has many large and important protected areas and game parks, which are vital to the long-term survival of its large animal populations. Maintaining and protecting these land areas for wildlife conservation and for scientific investigation will help to ensure the continued survival of Africa’s many large animal species. Tourism, when managed well, can provide a powerful local economic incentive for continuing maintenance and protection of wildlife and parks, and can foster considerable national and local pride in wildlife, also critically important.

KD: What is your favorite mammal that is found in Uganda and why? 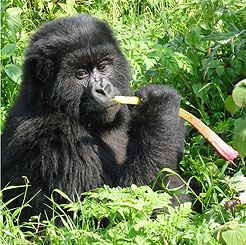 KH: It’s one of the reasons I’m leading the trip—my favorite Ugandan mammal is the mountain gorilla! Remarkably, even though it is the world’s largest primate, it was one of the last large mammals to be discovered—first given the scientific name, gorilla beringei, by a German scientist in 1903. Mountain gorillas hold great fascination for people all around the world, but there are none in captivity and there are only a select few places where they occur in Africa’s equatorial mountains (in Uganda, Rwanda, and the Democratic Republic of the Congo), so very few people are lucky enough to see these gentle giants in person.

KD: As you know, mountain gorillas are an endangered species, and there are differing views about whether gorilla trekking by tourists is harmful or helpful to the species. What are your views on this issue?

KH: It’s a very important point. Mountain gorillas are indeed endangered, with only about 700 individuals surviving. Ecotourism anywhere holds considerable potential as an incentive for nations and for local communities to conserve wild landscapes and endangered species, but it has two primary pitfalls. First, it comes with inevitable environmental impacts, as it requires long-term presence of people and steady traffic of goods, services, and tourists into what are often ecologically sensitive areas. For Mountain gorillas, which are very sensitive to contagious diseases spread by humans, this is particularly relevant. Another problem with ecotourism in many countries is that the money it generates sometimes doesn’t trickle down sufficiently to benefit local communities and landowners, and the economic incentives for long-term conservation are then eroded locally. That said, tourist visits to Mountain orilla habitat are governed by many regulations designed to protect both gorillas and humans, and most tourists work hard to minimize their impacts. Overall, mountain gorilla ecotourism has provided sufficient economic incentive and national pride to make gorilla conservation a success story in equatorial Africa. Mountain gorillas are thought to be the only apes that have a growing (rather than dwindling) population, even while Uganda, Rwanda, and the Democratic Republic of the Congo have had problems with political stability in recent years and decades.

Learn more about our wildlife tours.

Learn more about our journeys to Africa.

Kate Desvenain managed a variety of successful tours as a Smithsonian Journeys Program Manager before following her dreams to Costa Rica. There, she and her husband are building a bed and breakfast from the ground up while getting used to life in the jungle.

Kris Helgen is a Research Zoologist and Curator of Mammals at the Smithsonian's National Museum of Natural History. He earned his Ph.D. in zoology at the University of Adelaide in Australia and has worked on almost every continent. Kris is renowned for discovering new mammal species worldwide. He has appeared on the Discovery Channel and on television and radio programs around the world.