Following the River Seine to Paris

After a delightful three-day stay in Normandy at our 13th century farm house inn, La Ranconniere, we have one last breakfast buffet with its irresistible chaussons aux pommes (apple turnovers), a delightful complement to our tea or café au lait, and we set out in our comfortable tour bus for the final leg of our trip, with an early evening arrival in Paris before us. As if on schedule, and despite predictions of rain, the overcast sky begins to give way to rays of sunlight as we pull into our parking place near the charming port of Honfleur, from which Jacques Cartier and Samuel Champlain had left France in the 16th and 17th Centuries to discover a French New World in Canada along the St. Lawrence River and into the upper American Midwest. 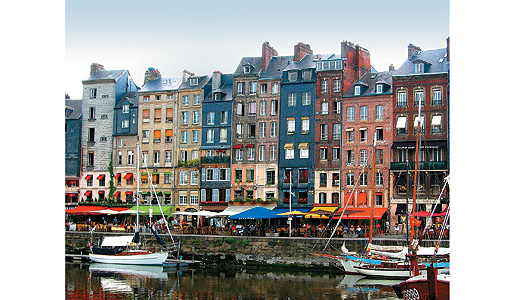 The lively port of Honfleur.

Still a fishing village today, but more attractive to many tourists because of its picturesque Vieux Bassin, lined with pleasure boats and cafes along the Quai Sainte-Catherine, Honfleur has become a prime weekend and holiday destination for Parisians who are just a few hours’ drive away on the AutoRoute, and who love to stroll around the narrow streets of the old town, patronizing its many chic art galleries and high-end shops. Our group of travelers joins the Parisians, at least in window shopping, but also takes time to visit the unusual, all wood, Sainte Catherine Church, with its very beautiful sculpted frieze of musicians, and a separate clock tower designed to limit damage should one part of the church catch on fire. While others take the opportunity to wander around the little town for photo opportunities that await around each corner, some of the travelers go with our guide, Francoise, to visit the Boudin Museum, home to the works of Eugene Boudin, who was one of the first landscape artists to paint out of doors, and who was an early teacher of Claude Monet.

After picking up sandwiches to eat on the bus, or having a quick crepe and coffee along the quays of the old harbor, we continue to follow the Seine River toward Vernon and Giverny, the home of that most famous of the Impressionist painters, who had sketched, under Boudin’s influence, as a young man in Honfleur. Upon our arrival at Giverny, we go first to discover the famous lily pad pond with its Japanese bridge, covered in wisteria, that appear in so many of Claude Monet’s paintings. In mid-June the lily pads are in full bloom and the surrounding gardens are spectacular in shades of pink, red, orange, blue, and every imaginable combination. Reflections of the different flowers in the pond offer dozens of views that might be mistaken for Impressionist paintings, taken directly from the very nature that Monet so loved. After leaving the lily pad pond, we follow an underpass below the road which was a train track in Monet’s day, and arrive at the fantastic gardens which extend below the dramatic, pink -colored house with dark green shutters, which for forty years in the late 19th and early 20th century was home to Claude Monet and his large family.

Monet’s gardens are resplendent with brightly colored flowers of every sort from roses and iris to purple garlic. Several pathways allow visitors to go up and down between the different beds to the delight of those horticulturalists along on the tour, as well as rank amateurs such as I am who can only repeat the word “gorgeous” at each newly discovered plant. Thanks to contemporary photographs from the period when Monet was at the height of his creative powers, his house has been restored with copies of all of his paintings hung in exactly the same location where he had placed them long ago. In addition to these copies of his own works, the originals of many of the now quite-valuable Japanese prints which he had collected are found on the second story along with Monet’s bedroom and that of his wife. Returning to the ground floor, we explore the dining room with its yellow ceiling and the spectacular kitchen, with copper pots hung on the blue walls, and featuring beautiful blue and white tiles above and around the large stove. Before exiting Monet’s property we browse through the gift shop, located in the studio especially built for his huge lily pad series of paintings that are now housed in the Orangerie in Paris. And just before leaving Giverny, we have time for a quick glance at the hill side behind and down the street from his house, where Monet created his famous series of haystacks, painted in all the different seasons. Today the field is covered with oats and poppies, and by closing one’s eyes, it is easy to imagine Monet sitting beside this field and painting one of his many works featuring bright red Coquelicots (poppies).

Boarding the bus one more time we take the AutoRoute that follows the path of the Seine River all the way to Paris. After about an hour and a half’s travel, near St. Cloud, a former royal palace, we emerge from an underground tunnel with a panoramic view of the Seine basin and catch our first view of the “old lady,” Paris’s Eiffel Tower, harbinger of still more exciting discoveries that await us tomorrow.