During our boat trip on Loch Lomand, amid the beautiful views and smooth sailing, we approached an inlet with a famous cave. The cave of Rob Roy MacGregor, where after having been made an outlaw and forbidden from wearing his clan tartan or speaking Gaelic or even using the name MacGregor, Rob Roy held up for some 10 years. As the guide on the boat noted, next to the cave mouth someone had painted in white paint "cave." The guide quipped that it was a wonder that the English didn't find Rob Roy with the label right next to his hiding place. Dorinda, who had studied Latin, turned to me and the four or five of us who were outside on the top deck of the boat and said, "Maybe it is from Latin "cave" beware. That would make more sense." She had a point; I told the guide about Dorinda's joke, and he told me he was going to add it to his repetoire. 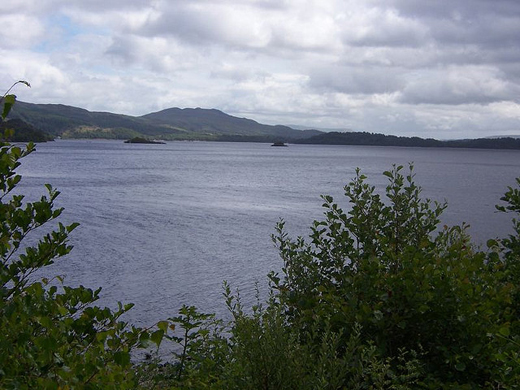 A few days later we were at the battlefield of Culloden, and it began to rain as we approached the gravestones that marked the place where so many MacGregors had died in the battle. Killed by vollies from English rifles as they charged over the marshy plain under orders from Bonnie Prince Charlie, who stayed safely behind the lines. The guide took us to the point where the English line had been, and told us about the artillary that the Highlanders would have been facing that day, and the rain started to pour down as if on cue. We hustled back into the exhibit building for tea, and explored the museum, listening to first person accounts of the Highland rising of 1745 read by actors from letters that have survived from the time. 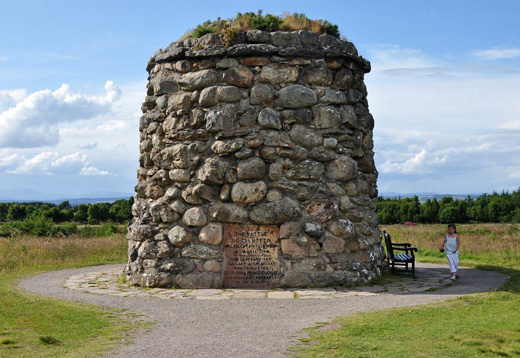 The memorial cairn at the center of the battlefield of Culloden. (Photo courtesy of Wikimedia Commons.)

When we arrived in Edinburgh, the weather was fine, and we were all delighted to move into our rooms at the George Hotel. Down the street was the tent for the Edinburgh Book Festival, and Michael Palin was reading from his new book the day after we arrived. The Fringe festival had taken over most of the rest of the city, and plays, musicians, and comics abounded. The biggest treat for most of the Smithsonian group, however, was the central event of the official Edinburgh Festival -- the Edinburgh Tattoo, where drum groups from all over the world delighted us all. I heard the song:

O ye'll tak' the high road, and Ah'll tak' the low (road)
And Ah'll be in Scotlan' afore ye
Fir me an' my true love will ne-er meet again
On the bonnie, bonnie banks o' Loch Lomon'


as I walked down the Playfair steps on my way back to George Street, and I couldn't help but think of the beauty of Loch Lomond, Dorinda's witty comment about "cave," and the somber dreich day on the battlefield of Culloden. 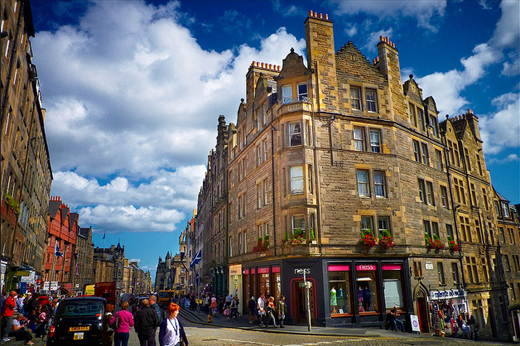 The streets of Edinburgh. (Photo courtesy of flickr user Moyan_Brenn.)

Our trip had taken us, rather like the itinerary of Robert Louis Stevenson's "Kidnapped," into the sublime natural beauty and Gaelic culture of the Highlands, up from Oban to Skye and Inverness, and then back to the lowlands and to the national capital. We had seen so much, and we had covered so much ground, but being back in Edinburgh, at the close of our journey, there was a sense that the strands were coming together, and we had made a kind of sense out of some of the most prevalent dualities that characterize this very civilized and wild country that is English and Gaelic, Lowland and Highland, Modern and Medieval, and at least until the referendum vote in 2014, British and Scottish.