« Splendors of Australia and New Zealand
Dispatches from Africa, Part 2: Angola to São Tomé and Príncipe »

Dispatches from Into Africa: From Namibia to Ghana 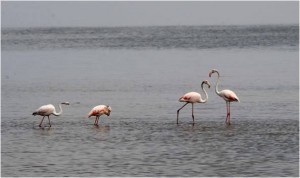 After the first good night sleep in three days, we spent our first full day in the city of Walvis Bay located between the Atlantic Ocean and the Namib Desert that also has a deepwater harbor. The Bay is very rich in plankton and other marine life and is commonly visited by migratory whales. Corinthian II was docked at the very large commercial port where we enjoyed the many granite and quartz rocks aligned in large (25 to 35-ton), carefully cut squares for export to Italy. Our first early morning stop was at a town beach which was at low tide and we enjoyed the high density of white pelicans and a small colony of flamingos.

Walvis Bay produces large amounts of salt for Namibia and South Africa and we observed the many pools at different stages of evaporation and colors where the salt was eventually extracted, piled up and processed. We drove 4x4 vehicles south for over two hours along the beach with the Atlantic Ocean to our right and immense sand dunes to our left. 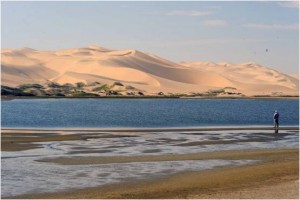 The Namib Desert is considered by geologists to be the oldest desert in the world, and it is also one of the largest conservation areas.  We had the opportunity to see several jackals close to the beach, many tracks of small lizards and abundant sea birds. Jackals are opportunistic and eat almost anything including dead seals, rodents, birds, insects, reptiles, fruits and berries and survive well in this environment. On the way back we were able to drive down very steep sand dunes. In Sandwich Harbor we observed the moving dunes and the gradual encroachment of the wetlands. Species have effectively adapted to utilize water and overcome the heat. We observed the head-standing beetle standing upside-down, back legs in the air to collect the mist that is carried in grooves to the beetle’s mouth.

In the afternoon we drove to the Mondesa Township and the Democratic Resettlement Community to enjoy a walking experience of the town and the meeting with the Damara Chief. At the town we met the Nama herbalist and had the opportunity to learn about multiple plants to cure a wide variety of medical needs. Friendly children joined our visit in the community. In the evening we enjoyed the sunset and dinner by the sand dunes west of the city. The sun was low and the shadows provided a soft outline of the dunes. Local young musicians played drum music while we enjoyed a buffet which included local venison.  We began to sail to Angola around 9:30 pm. 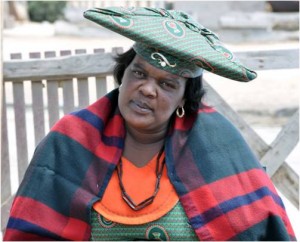 For the most part, our sailing to Angola was relatively smooth and the days were cloudy. We enjoyed the high abundance of dolphins and seals the first day and the frequency of observations diminished by the time we arrived to the warm Angolan waters. We dedicated the two days at sea to provide a series of lectures to the travelers, including “The Evolution of Africa and us,” “Early Maritime and Trans-Saharan Links between Asia, North Africa and Europe,” “Conservation and Development in Namibia: Connecting the Spots with Cheetahs,”  “African Landlords and European Strangers: The Atlantic Slave Trade, 15th –18thCenturies” and “Fascination with Herps.” The Captain’s Dinner was enjoyed by all.

Stay tuned for more from Dr. Dallmeier. We'll post his next set of dispatches as soon as we receive them. To follow along with the tour, click here to see the itinerary.