« The New Acropolis Museum
Into Africa: Who Was Diego Cão? » 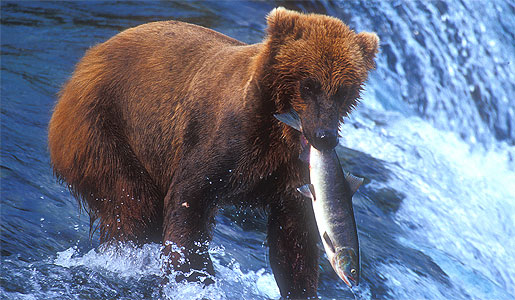 A hungry grizzly bear having a snack. Photograph by Roman Kruywczak

The Athabaskan people recognized Mount Denali, the massive  peak looming over a 600 mile long mountain range, as the "High One." But it's the animals surrounding the mountain that many people travel from all over the world to see. There are 39 known mammals that live in the park, but many come to see what are known as the Big 5 - moose, caribou, Dall sheep, wolves, and the grizzly bear.

For those of us who love cuddly teddy bears there's the question, "Are real grizzly bears the same way in real life?"

The grizzly bear is actually one of the most solitary and aggressive of all the bears. Due to their large size, they are unable to climb trees like the smaller black bear, and instead must stand their ground. A small grizzly may weigh about 300 pounds, while bears living in coastal areas can weigh as much as 1,200 pounds. When bears are competing for food, they may become even more irritable.

But who is the most dangerous of all? The Mama Bear. 70% of human fatalities when encountering a grizzly are by a female grizzly protecting her young. Should you ever meet a grizzly bear, it would be best to respectfully keep your distance.

What wild animal sighting will you always remember? Tell us your story.

There's still room on our Alaska's Best: Denali and Kenai Fjords tour leaving this August. Maybe you'll see all of the Big Five.