Connecting in Kyoto: Around the World with Dr. Richard Kurin

Arriving in Osaka, you quickly get a sense of the huge and quick growth of this port-city metropolis. As we made our way toward Kyoto, the factories, houses, and office buildings seemed to go on forever across the landscape. We arrived in Kyoto on the spring equinox, just ahead of the cherry blossoms—though some were just blossoming. 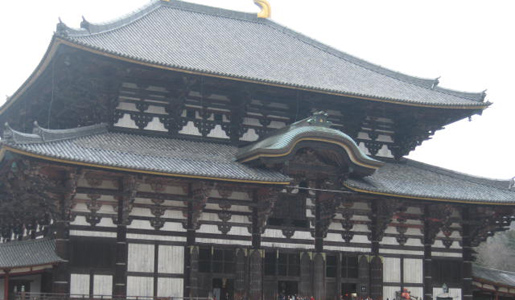 The group heads to the Todaji Temple

It was a holiday in Japan, a time when families visit Buddhist temples and Shinto shrines, honor ancestors, and make their wishes for a good year ahead. Japan combines Buddhist tradition—derived from Indian origins and Chinese versions, with indigenous Shinto beliefs about nature—that trees, rivers and streams, and mountains are alive with their own spirits. The Japanese have formed a variety of philosophies in a quest for harmony, order, and connection—with the universe and to each other. This was apparent in places we visited—like roadside and garden shrines, in a meditative Zen Buddhist rock garden, and at the Todaji temple of the great Buddha in Nara. Rather than doctrinaire belief, we saw ritual eclecticism in action, with people making offerings, lighting incense, contemplating the landscape—and also taking delight on temple grounds. 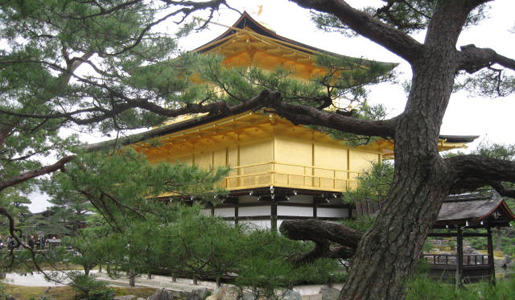 Visiting Kyoto’s Kinkakuji Temple or the renowned Golden Pavilion was a treat and one of the places that makes the city’s temples and shrines a UNESCO World Heritage Site. This is the former retreat of a Shogun ruler, and its gold façade reflected in a moat-like pond set within a lovely landscaped garden is impressive to behold. Several of our group became more than tourists as they were surrounded by Japanese students who apparently had the task of interviewing Americans as a school assignment over the holiday to practice their English. Kindheartedly, our folks responded, tutoring the students as they filled out their interview questionnaires. 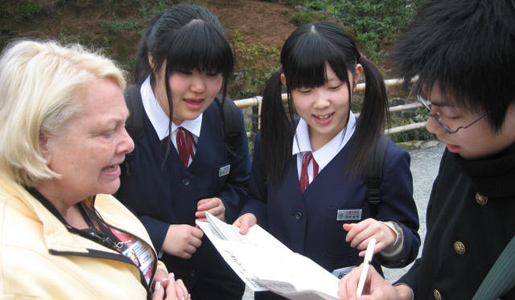 The visit to Nara’s Gate and Todaji Temple—also a World Heritage Site, was particularly poignant to me, as I’d done a good deal of work with musician Yo-Yo Ma, designer Rajeev Sethi, scholars Ted Levin, Henry Glassie and many others in putting together a program on the Silk Road in 2002.  We brought more than 500 artists from 28 countries to the Smithsonian Folklife Festival on the National Mall that summer—and their performances and artistry was witnessed by almost 1.5 million people over a two-week period. We’d built a replica of the Nara Gate on the Mall, as Nara represented the eastern terminus of the Silk Road—a vast network of trade routes and relationships joining East and West. Items from Central Asia have been found at Nara, indicating the flow of goods and a connection thousands of miles long stretching back to the 8th century A.D. Now, standing at the Nara Gate, I had to take a breath in the shadow of this magnificent, awesome structure. The temple itself is amongst the largest wooden structures in the world, and houses a Buddha 80 feet high. While a religious site, this was also a shrine to the movement of ideas and goods across geographic and cultural boundaries. 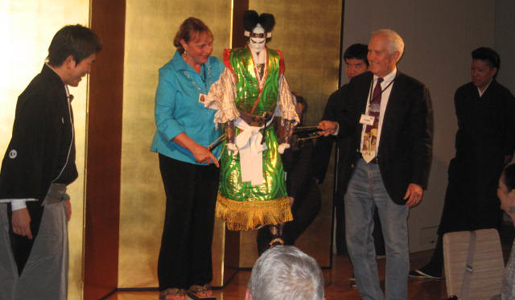 Our group crossed more boundaries at a superb evening performance. Gregory Kay from the U.S. Consulate provided a warm welcome. I had asked Noriko Aikawa, a Japanese heritage specialist now retired from her position as a director of UNESCO’s cultural program, to arrange for a bunraku demonstration. Bunraku is a narrative, story telling and puppetry tradition centered in Kyoto and Osaka. It grew in the 1600s, and its plays are essentially morality tales, with drama provided by puppets portraying townspeople, samurai, lovers and so on. The puppets are four to six feet tall and elaborately decorated. Made of hollowed out cypress, they are operated by an articulated system of levers and internal strings—and so great is the sophistication of their movement and expression of emotion that it takes three puppeteers to operate one puppet. The puppeteers showed us the ins and outs of the artistry and engineering, and then had three members of our group come up and learn from them. It was a beautiful moment; the Japanese artists were excellent teachers—every one of us got a sense of the skill and training needed to perfect this long-lived art. And our Smithsonian Journeys folks did well—to the acclaim of their fellow travelers!

Read Dr. Kurin's previous dispatch from Seattle: "Beginning with a Big Bang: Around the World with Dr. Richard Kurin"

POSTED IN:
Around the World Asia Dr. Richard Kurin Japan