« Standing In Awe of Buddha
Poulnabrone Dolmen - The Stones of Ireland » 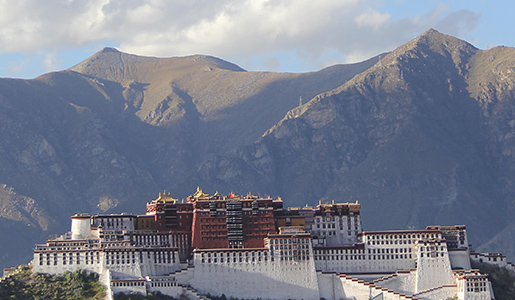 Lhasa, a trophy destination for 19th century explorers, is still a remote and mysterious place. When I first visited Lhasa in 1984 we endured a three hour bus ride on a bumpy dirt road from the airport. A new highway and tunnel has cut that trip in half.  Back then, Lhasa was a dusty, dilapidated town with wild dogs and open sewers. Today the city is much tidier. Paved roads, traffic lights, sidewalks, and public parks are signs of progress. Despite change, nothing can diminish the towering magnificence of the Potala Palace that tapers towards the sky and reaches an altitude of 12,500 feet on a mountain in the center of Lhasa.  The Potala was the winter residence and political-spiritual nerve center for successive Dalai Lamas who ruled Tibet since the 17th century.  Its fortress-like architecture comprised of the Red and White Palaces embellished with brilliant gold roof tops, is a beacon for Buddhist pilgrims and travelers from around the globe. 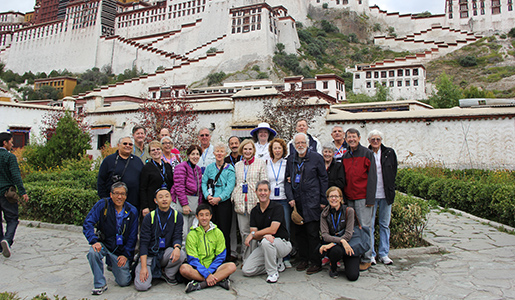 The morning our group visited the Potala, we joined the flocks of Tibetan pilgrims and began to climb the zigzagging stair ramps that lead up to the Palace. Feeling the altitude, we paced ourselves and rested on the landing of each stair set before pushing on to the next. Local pilgrims caught up, urged us on with their smiles, and then scampered upward with sure feet and adequate oxygen. At last we reached the top where a family of pilgrims sat on the final steps––savoring a snack and a spectacular view across the Lhasa valley. The women were striking, each wearing three large salmon-color coral beads woven into their hair. Tibetans cherish coral for its medicinal qualities and treat it as a hereditary gem. Our local guide identified the pilgrims as a tribe from a distant region in Tibet. For them as for us, this was a once in a life-time experience. 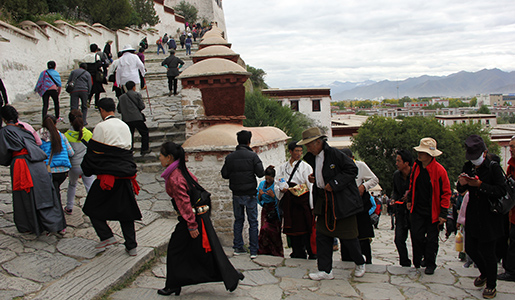 After reaching the top, we were first ushered into the White Palace to view the Dalai Lama’s main ceremonial hall and throne, private rooms, and a library lined with Buddhist sutras and historical texts. As our eyes adjusted to the interior light, every surface was super-charged with an explosion of color. Painted murals and hanging scrolls dressed the walls with Buddhist deities and historical scenes. Fabric banners and canopies embroidered or appliqued with the “eight auspicious symbols” were draped from ceilings and pillars. Thick Tibetan carpets woven with wool from highland sheep covered the floors and cushioned the seats where monks meditate daily. Here color seems equivalent to spiritual energy.

Then, through a tunnel-like passage, we entered a more sacred space in the Red Palace and were dazzled by the halls containing lavishly decorated burial stupas with the remains of past Dalai Lamas. Here the pungent smell of yak butter and incense smoke bespoke the daily rituals of monks who worship their past spiritual leaders. One of the most impressive and sacred stupa tombs belongs to the fifth Dalai Lama who is credited with initiating the construction of the Potala Palace in 1648. Standing 41 feet tall, the stupa is adorned with turquoise, coral, pearls and semi-precious stones and gilded with roughly 3,700 kg (8,157 lbs) of gold––amounting to 150 million US dollars at current values for the gold alone. Much of the wealth of Tibet is concentrated in these halls. 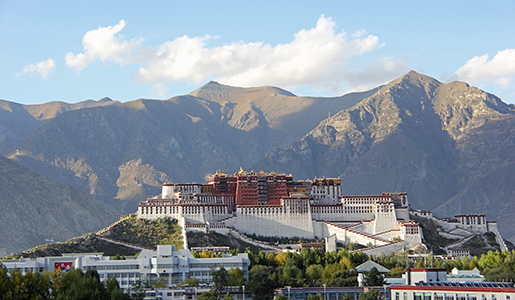 As we left the Potala and started our descent into Lhasa city, one person puzzled about what happened to all the cultural and historic relics in the Palace during the Cultural Revolution (1966–76) when the Red Guard demolished many monasteries around Tibet. The Potala was spared at the insistence of Chairman Mao’s comrade, Zhou Enlai, who reportedly deployed his own troops to protect it. Zhou Enlai is also the patron saint who saved the Forbidden City.

Read more about upcoming departures of our Classic China and Tibet tour.

Ingrid Larsen is a Chinese art historian and specialist in early Chinese painting. She did her doctoral training at the University of Michigan and Central Academy of Fine Arts in Beijing and received national scholarships from the National Academy of Sciences and the Fulbright Commission. While a Chinese language student in Taiwan in the 1980s, Ingrid worked at the National Palace Museum in Taipei, and more recently was a consultant for the permanent Ancient China exhibition in the newly opened National Museum of China in Beijing in 2010–11. From 1997–2007 she worked on the project to catalogue the Song and Yuan dynasty paintings in the Freer Gallery of Art, Smithsonian Institution, and has published on the formation of Charles Lang Freer’s Chinese painting collection. In 2012 she served as editor for a catalogue and exhibition of modern Chinese calligraphy at the Arthur M. Sackler Museum of Art and Archaeology at Peking University entitled Pictures of the Mind: The Art of Wang Fangyu. Her current research focuses on the emergence of Chinese art collections in American museums and private collections during the 19th and 20th centuries. Ingrid has been traveling to China for three decades, and spent five years living in Beijing––most recently 2009–2010.