There is nothing quite like Balloon Fiesta! For nine days every October, the sky over Albuquerque is filled with hundreds of colorful balloons in all shapes and sizes. There are mass ascensions, when as many as 600 balloons will take to the air in less than two hours. Visitors to the Fiesta watch as pilots compete to see who can come closest to a target. The intrepid aeronauts entered in the America’s Challenge gas balloon race will launch one evening, with the prize going to the team that flies the farthest before landing—often thousands of miles and many days later. Then there are the special shapes—balloons shaped like animals, snowmen, flowers, advertising icons—you name it. At the end of each day, Fiesta Park “glows” as hundreds of hot air balloons fire their burners and light up their envelopes while tethered to the ground. Fireworks cap the evening festivities. 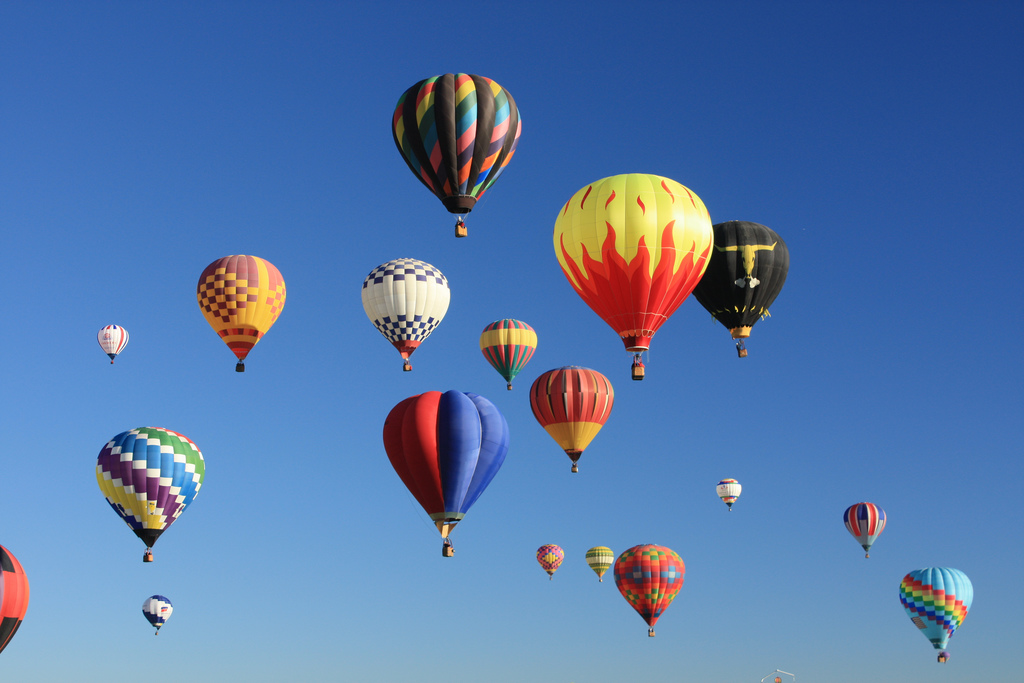 It all began in 1972, when local residents turned out to watch 13 balloons compete at the first Albuquerque balloon event. Thirty-five years later, the event drew over 800,000 visitors who thrilled to the sight of more than 700 balloons from 41 states and 19 foreign nations. In an age when human beings have walked on the moon, sent robot explorers rolling over the surface of other worlds, and dispatched automated spacecraft beyond the edge of the solar system, we still get that thrill at the sight of the oldest flying contraptions floating across the sky.

As a confirmed “balloonatic” and historian of buoyant flight, I wouldn’t miss this annual event for the world. In lucky years, like this one, my friends at Smithsonian Journeys invite me to share my enthusiasm with a group of Smithsonian members from across the country. We spend one long weekend at the festival, enjoying the sights and sounds, walking along the streets of vendors offering food, clothing, crafts, and every sort of balloon souvenir imaginable. I offer the group some thoughts on the history of ballooning, and do my best to explain everything from how balloons fly to the operation of the “Albuquerque box,” a unique weather pattern that enables pilots, on a good day, to make repeated passes over Fiesta Park without landing. I am privileged to take our travelers behind the scenes, introducing them to balloonists who will explain the intricacies of the sport. One of the folks running the festival will have dinner with us, providing insight into the mechanics of ballooning and answering questions about what you see on the field.

Best of all, everyone who attends Albuquerque with our group gets to fly! We ascend in hot air balloons with baskets large enough to take eight to ten people up at once. You will take the air during one of the mass ascents, and share the sky with hundreds of other balloons. The sensation of being aloft, surrounded by scores of other colorful balloons, watching the crowds below, and thrilling to the sight of yet more balloons inflating and rising into the air beneath you is an experience never to be forgotten.

I look forward to meeting some of you this fall and sharing the experience. One bit of advice for those who are considering joining us at the Fiesta—don’t forget your camera!

Have you ever been to the Balloon Fiesta? Share your experience below.

Tom Crouch is a senior curator in the National Air and Space Museum’s aeronautics department. An historian of early flight, he is the author of The Bishop’s Boys: A Life of Wilbur and Orville Wright.