A River Runs Through It: The Heartbeat of the Cities of Old World Europe

This year I was trying to decide what makes the “Old World Europe” journey so special. To be sure, the rich history, cultural and artistic treasures, and vibrant modern life of the cities on the itinerary—Warsaw, Krakow, Budapest, Vienna, Bratislava and Prague—definitely help make the journey so attractive and memorable. But each one of these destination cities also shares one important thing—to quote the title of Norman Maclean’s novel, "A River Runs through It." A river (sometimes the same river) is an inseparable part of the cityscape, history, culture, and present day life of each of these cities. Yet each city, in its own way, enjoys a unique relationship with its river, and the place of the river in the city’s life (and our experience of the city as visitors) differs in interesting ways from destination to destination. I set out to explore the relationship between these cities and their rivers.

The river Vistula (Wisła) flows through both Warsaw and Krakow, yet its personality in each place (like that of each city) is quite distinct. Warsaw’s Old Town and the major areas visited on the Old World Europe journey lie on the western side of the river. Here the Vistula, flowing through the broad Mazovian plain, has broadened out significantly, with wide riverbank areas and sand beaches that Warsovians enjoy on a sunny afternoon in Indian Summer. On the afternoon of our arrival in Warsaw I used my free time to take advantage of the reasonably fine-weather and walk across the bridge named for Prince Józef Poniatówski  to Warsaw’s suburb of Praga, in particular to the district known as the Saxon Meadow (Saska Kępa). Spared much of the wartime destruction that left 85% of Warsaw in ruins, this part of the city now has pleasant tree-lined streets with bistros, restaurants and shops. Warsaw’s relationship with its river is celebrated in the city’s coat of arms, featuring a mermaid armed with a sword and shield. The story goes that the mermaid (syrenka, or “little siren” in Polish) led the Polish prince Bolesław of Mazovia to the site of a fishing village on the river and ordered him to found a city there. From that beginning, sometime at the end of the thirteenth century, the city developed further. When Poland joined with Lithuania to form a Commonwealth of both nations, Warsaw’s location midway between the two capitals of Krakow and Vilnius led the Kings to make the city their new capital, a change that became permanent in 1596. 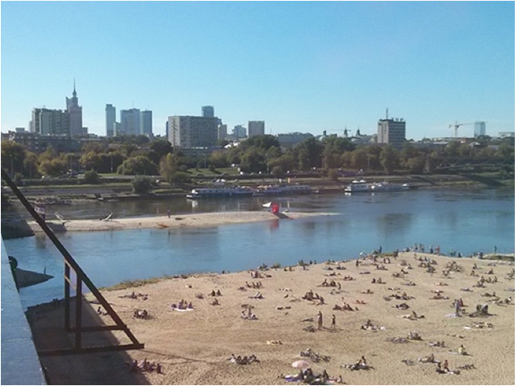 Krakow, the ancient capital of the Polish kingdom, also lies on the Vistula, but much closer to its sources in the Silesian Beskids near the border with the Czech Republic. As we looked down from the Wawel Castle, we could see that the river is narrower here than in Warsaw, and seems more intimately connected to the old city. Yet while the river is central to the current modern city of Krakow, the old part of town lies only on the northern, left bank of the river, and the associated district of Kazimierz seems in some ways closer to the water. Indeed it should, since Kazimierz was once an island in the Vistula, as recalled by the name of the street that marks one of its boundaries, Starowisłna (Old Vistula) street. City development gradually filled in the former branches of the river, leaving only memories behind. A modest walk along Starowisłna from Krakow Old Town led a group of us to the Kazimierz district for a pleasant evening meal in one of its many restaurants. 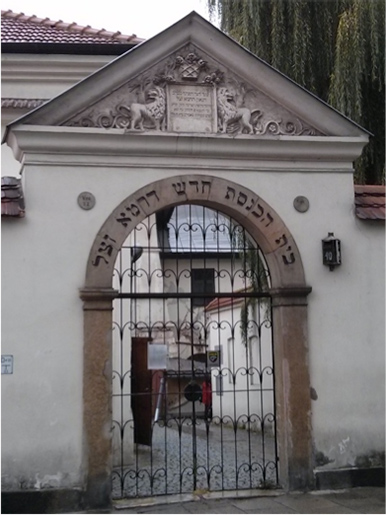 In contrast to the two Polish capitals, Budapest is both divided and joined right through its center by the river Danube—a situation that is commemorated in the coat of arms adopted by the united city in 1873. The river is an intimate part of the cityscape, and the Margaret Island in the river one of its favorite playgrounds. Yet it is still a broad and formidable power, bridged permanently only in 1848 by the suspension bridge designed by Adam Clark and financed by the patriotic Count István Széchenyi. 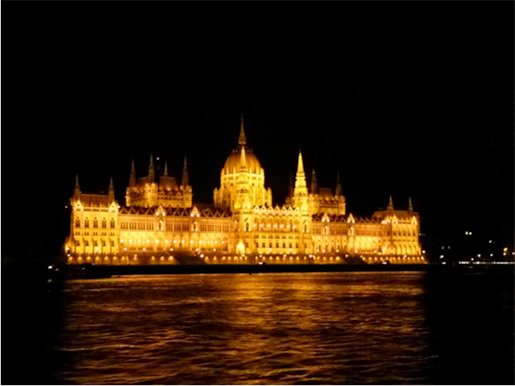 The Széchenyi Chain Bridge remains one of the landmarks the visitor will use for orientation purposes, and an impressive engineering feat. So many of the city’s significant buildings are along the riverbanks that a tourist river cruise after dark is a wonderful way to enjoy the sights.  But the best place to appreciate the position of the Danube in the life of Budapest is from the summit of Gellert Hill, where we stood on a sunny morning after the previous day’s cold rain, and looked along both the Buda and Pest sides. We could see such landmarks as the Royal Castle and the spire of Matthias Church, the Houses of Parliament, St. Stephen’s Basilica and other buildings of Pest, and the Chain Bridge providing a connection between them. Walking or riding across the Chain Bridge was part of our enjoyment of the life of Budapest. 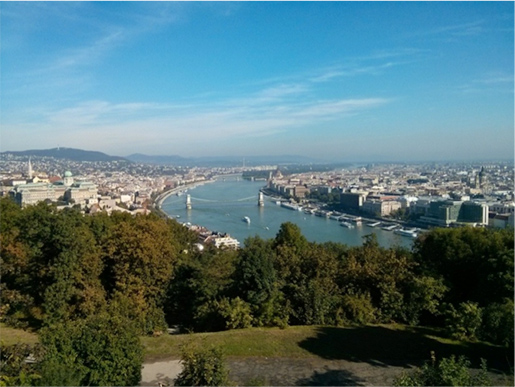 Bratislava, too, was once the capital of Hungary—at least that part controlled by the Habsburgs while the Ottoman Turks ruled over most of the rest of the kingdom. Now it is the capital of Slovakia, which joined the ranks of independent states at the beginning of 1993. Here, too, the Danube, navigable for its entire length from Bavaria to the Black Sea, is an important part of the city. 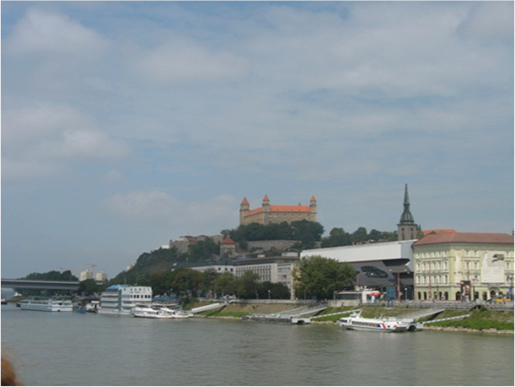 Gazing down to the three countries corner from the castle hill, we could see that the Danube is a thoroughfare for goods and visitors on the way between Vienna and Budapest, constantly busy with the ebb and flow of working and pleasure craft. Yet although the Petržalka district of Bratislava (joined to the new state of Czechoslovakia in 1919 after the First World War) lies on the southern, right bank of the river, the old town and Bratislava Castle lie only on the northern, left bank. Several bridges join the two sides of the river at Bratislava, the most striking being the assymetrical suspension bridge, the Bridge of the Slovak National Uprising (also simply called the “new bridge”). Built between 1968 and 1972 to connect Petržalka with the Old Town, the bridge destroyed most of the old Jewish quarter of Bratislava, including a moorish style Neolog synagogue (the Orthdox synagogue had been destroyed already in 1961). The bridge juxtaposes the old represented by the castle and the palaces of Austro-Hungarian nobility on the left bank with the new of a densely settled residential district, dominated by the concrete panel apartment blocs built beginning in the 1970s by the Czechoslovak regime. 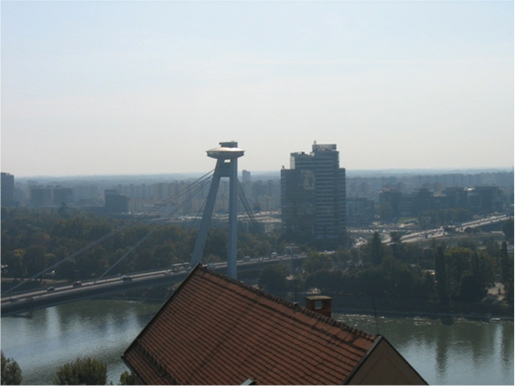 The Danube is inseparably linked with another Old World Europe destination, Vienna, thanks to the immortal music of Johann Strauss’s “Blue Danube Waltz.” But (as the Viennese like to say) not only is the Danube seldom blue, depending on the weather, but it is not as central to the cityscape of the old part of Vienna as it is in Budapest. True, a canal drawn down from the main course of the river provided the Habsburgs with a moat around their residence city and castle in Vienna, but the river is essential really to the modern, Danube City section of Vienna with its soaring skyscrapers housing the headquarters of international organizations. There too are the river islands with their sandy beaches, where the Viennese can join the Warsovians in some late-summer sunbathing, but the fact remains that the river is more part of the picture frame of Vienna than it is the heart of the picture. 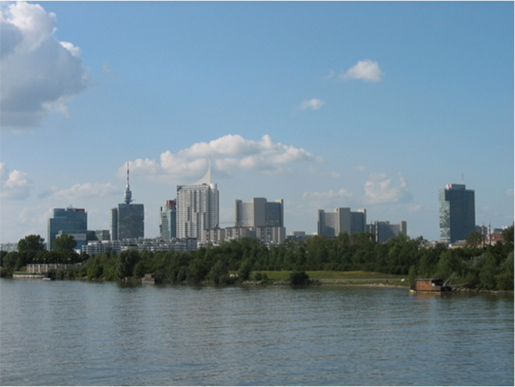 But for the final city of the Old World Europe journey, the river is the central heart of the experience. Flowing into Prague from the south, the Vltava (or Moldau, to use the German name more familiar still to most foreigners) makes a large S-curve as it flows through Prague before it continues north towards the Elbe and eventually the North Sea. Immortalized in Bedřich Smetana’s tone-poem “Má Vlast” (My Homeland), it is impossible to remove it from my experience of and feelings about Prague. The Vltava and its bridges knit together the towns of Prague into the great metropolis that is the Czech Republic’s capital. The oldest, and the one most familiar to foreign visitors, is the Charles Bridge, built in the fourteenth century to replace an earlier structure destroyed by floods. Now the second oldest bridge in Central Europe—after the one across the Danube at Regensburg—the Charles Bridge is a link (or perhaps, as we jostled for space with other visitors crowding along its length during the height of the season, rather an obstacle course!) between the historic Old and New Towns of Prague and the Castle, Castle Town, and Lesser Quarter. 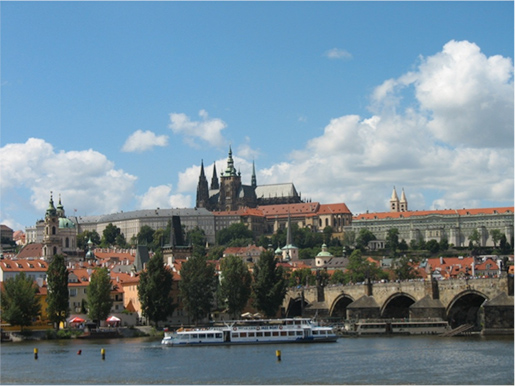 If Budapest and Vienna, the two ambitious former capitals of the Austro-Hungarian Empire, impress us as visitors with their almost imperial scale—and with impressive riverscapes in keeping with that scale—the impact Prague makes is somehow different. Though a proud royal capital in its own right, to me Prague’s scale is smaller, more intimate, even (dare one say it?) provincial. Yet every city of the Old World Europe journey has its intimate and small-scale moments for us to enjoy, along with the grandiose relics of the past and the bustling present-day life of a modern European metropolis. And a unique part of all those experiences, making these cities what they are, are the rivers that run through them.

Hugh Agnew has been fascinated by Czech history and the Czech lands since first arriving in Prague as a graduate student in 1977. Now Professor of History and International Affairs at the George Washington University in Washington, D.C., he has taught courses and published books and numerous articles about the Habsburg Empire, the Czech national identity, and Czech heritage and history. His insightful talks on past Smithsonian journeys through the Bohemian countryside, on the Elbe and Danube Rivers, and in Prague at Christmastime have made him a favorite with Smithsonian travelers.