A Day in the British Isles 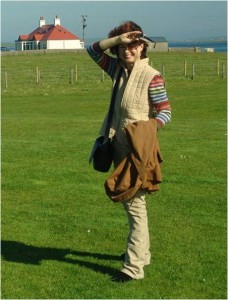 As we had been sailing around northern Scotland over the past few days, from the Hebrides to Loch Ewe, Fair Isle, Orkney and Shetland, I was thinking about Vikings, especially since we would be ending our journey in Norway, essentially retracing the water routes of Norsemen a thousand years ago. But this day in Shetland took us back long before the Vikings as well as long after, with a healthy dose of hiking and bird watching thrown in.

During breakfast the captain brought the ship along the southeastern coast of the Mainland of Shetland to the much smaller island of Mousa where we anchored and disembarked in zodiacs. A group of us started out hiking across the island with the ship's naturalist and ornithologist Richard White, who pointed out the many types of sea birds -- including northern gannets, storm-petrels, red-throated loons, and many more -- found along the cliffs. My personal hope of seeing a puffin was not yet realized, but we did get a close view of an otter who suddenly bolted from a boulder beside our path and disappeared between the rocks. 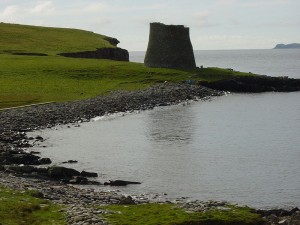 Returning to the landing site, we then explored the Broch of Mousa, which is a massive round tower over forty feet high with inner and outer stone walls flanking an internal staircase up to the top. Built around two thousand years ago, the broch had raised floors which probably served as the main living areas, and various niches for sleeping or storage areas. As the tallest prehistoric structure in Europe and one of the best preserved, the Broch of Mousa is a stunning testament to the engineering skill of its Iron Age builders.

We returned to the ship in time to hear the former president of Ireland, Mary Robinson, give a talk on board. President Robinson was traveling with us after having just attended Queen Elizabeth II's first State Visit to Ireland the previous week, and she spoke about the significance of the Queen's visit as a moment healing between England and Ireland. As she spoke, we traveled to Lerwick which is the main port and capital of the Shetland Islands.

Stretching our legs after lunch, we set out for the southern end of the main island where we hiked up to the Sumburgh Head and viewed the impressive vista from the cliffs around the lighthouse. To our delight, there was a crowd of puffins nesting just a few feet from the walls where we were standing. It was wonderful to watch them in flight, beating their wings so fast they became a blur. I have read that puffins resemble black and white footballs when they fly, but to me they looked more like a cross between penguins and bumblebees.

Having finally had our fill of puffins, we set off across the grassy fields to the archaeological site of Jarlshof. The occupation of this extraordinary site spans the bronze, iron, medieval and early modern ages, with the earliest houses dating from between 2500 and 1500 B.C. and the latest building, Earl Patrick's "Old House," dating from the seventeenth century A.D. Between these periods, the Norse lived here as well, with a settlement at Jarlshof that lasted from the ninth to the thirteenth centuries. A vital hub in the sea routes between Scandinavia, Ireland, Britain, Iceland and Greenland, Jarlshof brought me back to my earlier thoughts of Vikings, and reinforced once more how so many places on this journey around the British and Irish Isles which seem remote and isolated to us today were at the center of earlier cultural geographies based on seafaring.

With a Ph.D. in medieval history, Cassandra Hannahs spent most of her academic career at Middlebury College in Vermont, where she was a tenured professor of history. At Middlebury, Cassandra regularly taught courses on Celtic, Viking and Anglo-Norman Studies, as well as more general courses on the Middle Ages, the Renaissance, and the history of Christianity. In her research and lectures, Cassandra explores the cultural and political exchanges that have historically linked Ireland, Scotland, England, and Europe. As Study Leader for the Smithsonian since 2000, she enjoys sharing her love and knowledge of the British Isles and Ireland with travelers on land and sea.